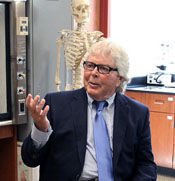 Dr. Herbert Boyer is internationally-recognized for his pioneer technological discovery of recombinant DNA or gene splicing technology which has led to numerous life-saving medical advances.

Now retired and living in California, he is Professor Emeritus of Biochemistry and Biophysics at the University of California at San Francisco and co-founder of Genentech, Inc., the San Francisco-based biotechnology company he started with the late venture capitalist Robert Swanson in 1976, a company that has billions in assets and thousands of employees.

Born in nearby Derry, Pennsylvania, Dr. Boyer was a commuting student who earned his bachelor of science degree in biology and chemistry in 1958 from Saint Vincent College. He credits the late Fr. Joel Lieb, O.S.B. for inspiring his interest in genetics research. Dr. Boyer later earned both his master's and doctorate from the University of Pittsburgh.

He has received numerous prestigious awards for his work including the National Medal of Science presented at the White House by President George Bush in 1990, the Lemelson-MIT Prize in 1996 and the Albany Medical Prize in 2004. In 2004, Business Week magazine named him one of the "Greatest Innovators of the Past 75 Years" and Parade Magazine named him one of the "Ten Most Important Innovators Who Transformed the World." He was featured on the cover of TIME magazine in 1981 with a story entitled, "Shaping Life in the Lab: The Boom in Genetic Engineering, Genentech's Herb Boyer."

In 1989 Dr. Boyer and his wife, Grace, made a $1 million gift to The Campaign for Saint Vincent College that created student scholarships in memory of Mrs. Boyer's father, T.L. Hensler, and her brother, Timothy. These scholarships continue to enable many students with demonstrated academic or leadership qualities to attend Saint Vincent.