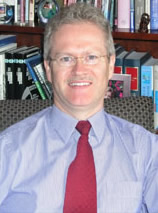 As Dean of the McKenna School, Dr. Quinlivan oversees more than 50 full-time and adjunct faculty members, 475 undergraduate and graduate students and four centers. In addition, he is a full professor of economics and the cofounder and co-director of the Center for Political and Economic Thought at Saint Vincent College. He is a member of the Executive Editorial Board of the Journal for Markets and Morality published by the Acton Institute and a member of the Board of Directors of the Turkish Cultural Center in Pittsburgh. From 1989 to the 2001, he served as an adjunct faculty member at Carnegie Mellon University’s Economics Department where he taught international trade, international monetary theory and monetary theory. He was a Fulbright Scholar at Shandong University in the People’s Republic of China from 1988 to 1989. Quinlivan received his PhD in economics at the University of Albany and BA at State University of New York at Geneseo. Dr. Quinlivan has co-edited and authored seven books, six monographs, and numerous articles in the areas of international trade, public finance and international finance. His most recent books include: A Catholic Response to Economic Globalization: Applications of Catholic Social Teaching (co-authored with Paul Cleveland, Gregory Gronbacher and Michel Therrien); Public Morality, Civic Virtue and the Problem of Modern Liberalism (co-edited with T. William Boxx); For Freedom and Prosperity: Philip M. McKenna and the Gold Standard League (co-authored with Brian Surkan); and Toward the Renewal of Civilization: The Political Order and Culture (co-edited with T. William Boxx). Dr. Quinlivan has won teaching awards at both Saint Vincent College (1993 and 2007) and Carnegie Mellon University (2000). During the summer of 2005, Quinlivan received an International Business Fellowship from the University of Pittsburgh, for a ten-day seminar in Russia, Bulgaria and the Czech Republic. In 1997, Shandong University in PR China awarded Quinlivan an honorary full professorship rank. Dr. Quinlivan is the cofounder and former faculty moderator of the ballroom dance and the Gilbert and Sullivan clubs at Saint Vincent College. Dr. Quinlivan is one of the key administrators dedicated to enhancing Saint Vincent College’s academic links to China. He has traveled to China 51 times and has negotiated over ten academic affiliations between Saint Vincent College and some of the best universities in China.