LATROBE, PA – Saint Vincent College has announced its 2021 Alumni of Distinction in recognition of exemplary service, commitment and the ways in which their accomplishments, affiliations and careers have honored the legacy of Saint Vincent.

The Alumni of Distinction will be honored this year as part of Homecoming and Fall Family Weekend during a ceremony on Friday, Oct. 1, at the Fred M. Rogers Center on campus. The 2020 Alumni of Distinction (Jeffery D. Ansell, C’90; Dr. William A. DiCuccio, C’70; Mark W. Durishan, C’70; Paul P. Giunto, C’70; John P. McCann, C'70; and Dr. Paul F. Moersdorf, C’70) will also be recognized at the ceremony.

After serving in the U.S. Army for two years, Eugene “Gene” Dolecki enrolled in the 3/2 Engineering program at Saint Vincent College. Prior to graduating with High Honors in 1963, Mr. Dolecki was named Who’s Who Among Students in American Universities and Colleges.

Mr. Dolecki attended graduate school at Penn State University, earning his BSME and MSME. Shortly after graduation in 1969, he was hired by the Transportation Systems Division of General Electric and served in a number of capacities before retiring as an Executive Brand Engineering Manager in 1997. While at GE, Mr. Dolecki traveled throughout the world to promote and support GE Transportation Products. Among his accomplishments at GE was spearheading the standardization of the Mine Locomotive Product Line and holding a key leadership role in the development of the first computerized Freight Road Locomotive Product Line in the Americas.

In 2002, he came out of retirement for four years as a Technical Advisor to the CEO of Railpower Corporation before re-retiring to Florida. Mr. Dolecki has dedicated himself to service, including with the Diocese of Venice (FL) on project development and to provide assistance to those whose need is greatest. He currently serves on the Board of Directors of the Sugar Bowl Project, a Catholic Charities initiative dedicated to assisting families that find themselves in a temporary financial emergency, and is an organizer of their annual fundraiser, which generates $70,000 annually to support the Sugar Bowl mission. Mr. Dolecki is also a member of the Knights of Columbus, holding numerous positions and recognitions.

He and his wife, Suzanne, have been married for 53 years and now reside in Lakewood Ranch, Florida, and are the parents of a son and a daughter. 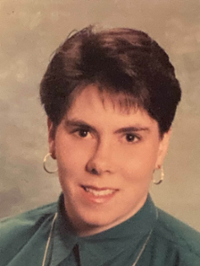 Attorney Eileen K. Flinn graduated from Saint Vincent in 1990 with a Bachelor of Arts in political science before going on to earn her Juris Doctorate from the Duquesne University School of Law in 1998. Miss Flinn was very active in both the Saint Vincent and Duquesne communities as a student, participating in several sports and committees at SVC and writing for and editing news publications at both institutions. While at SVC, Miss. Flinn was also named for the Who’s Who Among Students in American Universities and Colleges.

Miss Flinn has held many prestigious legal positions before returning to SVC, where she currently serves as Assistant General Counsel, Assistant Vice President of Institutional Advancement, and the Title IX Coordinator. Prior to returning to SVC, Miss Flinn served the Commonwealth of Pennsylvania in the Administrations of Governors Tom Ridge, Mark Schweiker and Ed Rendell, as well as both caucuses of the Senate of Pennsylvania.

Miss Flinn remains just as involved with the SVC community as she was as a student, being an active member of the Forward Together Advisory Committee, a group of faculty and administrators who have planned and continue to monitor the COVID-19 protocols for the College and Seminary, and serving on the Advisory Council for the School of Arts, Humanities and Social Sciences for the past 10 years.

Outside of work, Miss Flinn is dedicated to serving her community, including raising more than $18,000 for Light of Life Ministries through the Dick’s Sporting Goods Pittsburgh Run for a Reason Charity Program during the past five years.

A global leader in the biopharmaceutical industry, Kristi Lengyel graduated from Saint Vincent College in 1996 with a Bachelor of Science degree in Chemistry and later received her Master of Business Administration from the University of Chicago Booth School of Business in 2007.

With a special dedication to patient advocacy that has spanned her 24-year career, Ms. Lengyel has spoken at conferences and directed and developed strategic alliances with 80 advocacy organizations in her previous role as the Head of U.S. Patient Advocacy with UCB, Inc; now as Head of Healthcare System Strategy, she is charged to increase the treatment and diagnosis of osteoporosis. In addition to serving and chairing various organizations, she is the industry representative on the Task Force on Research Specific to Pregnant and Lactating Women with the National Institutes of Health (NIH) and has worked with both the American Gastroenterological Association and the Society of Maternal Fetal Medicine to develop a clinical care pathway for women living with gastroenterological conditions who are pregnant or lactating, which has since been published in peer-reviewed journals.

Ms. Lengyel’s Catholic faith has remained a large part of her life. In every community she has lived in, Ms. Lengyel has volunteered with the Church in a number of capacities as either RCIA instructor, lector, or Extraordinary Minister of Holy Communion, most recently serving as a Care Minister, ensuring that end of life care is compassionate and based on Catholic moral teaching.

Albert J. Novak, Jr. graduated from Saint Vincent College in 1981 with a Bachelor of Arts in Communication and later went on to receive his Master’s degree in Public Management from the H. John Heinz III College of Information Systems and Public Policy at Carnegie Mellon University.

Currently, Mr. Novak serves as the Vice President and Chief Philanthropy Officer of Excela Health, a not-for-profit health system that is the leading provider of health care based in Greensburg, Pennsylvania. In this role, Albert is the lead fundraiser for Excela and the chief administrative officer for the system’s supporting foundations, the Latrobe Area Hospital Charitable Foundation and the Westmoreland/Frick Hospital Foundation. In addition, Albert is an independent consulting vice president with Grenzebach, Glier + Associates.

Mr. Novak is also active in his community, serving on the Board of Trustees for the Westmoreland Museum of American Art and the Westmoreland County Local Operating Board of the United Way. He is a past director of the Support America’s Teachers Foundation, Dress for Success Pittsburgh and the Westmoreland Symphonic Winds, and he was named a Distinguished Alumnus of Greensburg Salem High School in 2019. Mr. Novak makes his home in Greensburg with his wife, Sally Anne, and enjoys spending time with their children and grandchildren.

Attorney Gino F. Peluso is a 1977 graduate of Saint Vincent. He received a Bachelor of Arts degree in English with a minor in Education and received his Juris Doctorate degree from the Duquesne University School of Law. At Duquesne, he served as a commencement speaker, by virtue of his position as Law Alumni Association President, and received the prestigious Dr. John E. Murray, Jr. Meritorious Service Award. During his time at SVC, Attorney Peluso was a three-year letterman on the school’s intercollegiate tennis team, a student senator and was secretary to both the Student Faculty Administration Board and the President of Student Government. Most Recently, Attorney Peluso served as President of the Law Society of Saint Vincent College for six years, which earned him the distinction of being the organization’s longest-tenured president.

Attorney Peluso is celebrating his 40th year in the practice of law, which includes nine years as a prosecutor in the Westmoreland County District Attorney’s Office, and he is a participating member of the Westmoreland Bar Association. In addition to running his own law practice in Lower Burrell, Attorney Peluso is an adjunct professor at Westmoreland County Community College. He is active in his community as a Fourth-Degree member of the Knights of Columbus, member and former president of the Lower Burrell Lions Club, and previously as the long-time Chairman of his congressional district’s Military Academy Selection Committee. Attorney Peluso has received the Valley News Dispatch/Trib Total Media Readers' Choice Silver and Bronze Awards in the category of “Best Attorneys" and also represented Trib Total Media when he was selected to throw out the first pitch at a Pittsburgh Pirates baseball game.

Educated in Catholic Schools throughout his entire academic career, Attorney Peluso was selected to represent his alma mater, St. Joseph High School, during their centennial celebration. Attorney Peluso is a member of Mount Saint Peter Church in New Kensington and its Holy Name Society, and he has continued to follow the “time-honored traditions” of Saint Vincent College throughout his life.