The Saint Vincent community is mourning the loss of Rabbi Jason Z. Edelstein, who passed away on Saturday, September 4, 2021.

Rabbi Edelstein taught courses to largely Roman Catholic students at Saint Vincent College on Jewish theology and history, the Holocaust, and on Catholic-Jewish dialogue. For more than two decades he also made use of his training as a clinical psychologist and his decades of service as a rabbi to train Saint Vincent seminarians in pastoral counseling, creating a relationship as unique and cherished as Rabbi Edelstein’s character.

Teaching well into his ninth decade, Rabbi Edelstein was a joyful, tireless, and engaging teacher, who brought his tremendous intellectual acumen, his pastoral training, and his good sense to the classroom every day, and generations of Saint Vincent students and seminarians have been blessed because of him. 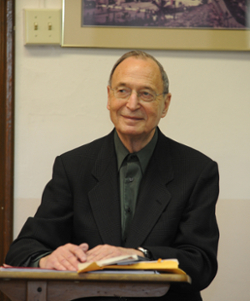 Rabbi Edelstein came to Saint Vincent at the invitation of Father Campion Gavaler, O.S.B., who was chair of the Theology Department in 1968. In the wake of the Second Vatican Council and its emphasis on healing relationships between Catholics and Jews, Saint Vincent had hosted a major conference on the interfaith dialogue. Father Campion, building on that momentum, hired Rabbi Edelstein to teach a course on Catholic-Jewish dialogue in the college. The result of this brave experiment was a commitment to mutual enrichment between Rabbi Edelstein and the students of Saint Vincent, where both came to know their respective faiths in a different and brighter light.

The creation of the endowed chair in Rabbi Edelstein’s honor was announced in 2015, in part to mark the 50th anniversary of “Nostra Aetate,” the landmark Vatican document from the Second Vatican Council that called for dialogue between Roman Catholicism and other faiths. The chair was made possible through a major gift from the family of Rabbi Edelstein, and the current holder of the chair is Rabbi Jamie Gibson, rabbi emeritus of Temple David and a close friend and colleague of Rabbi Edelstein.

"Saint Vincent College mourns the loss of our beloved professor, Rabbi Jason Z. Edelstein. Rabbi Edelstein taught for more than 50 years at Saint Vincent College and Seminary. We are honored to continue his legacy with the Rabbi Jason Z. Edelstein Endowed Chair for Catholic Jewish Dialogue, now held by Rabbi Jamie Gibson of Pittsburgh. Our prayers and sympathy go to his family, friends and to those to whom he ministered over these decades. May his memory be a blessing."

An obituary and visitation and funeral information for Rabbi Jason Z. Edelstein may be found by clicking here.