As the first-place finisher in the Scholarship Competition, Anthony Sparta, a senior at Thomas Jefferson High School in Jefferson Hills, has been awarded a four-year, full-tuition, room and board scholarship valued at more than $200,000.

Four students have been awarded four-year, full-tuition scholarships, valued at more than $150,000, by virtue of their performance in the competition, including Daniel Hough, of Jeannette; Noah Lohr, of Greensburg; Cassandra Lanza, of Shermans Dale; and Sara Package, of Ligonier. 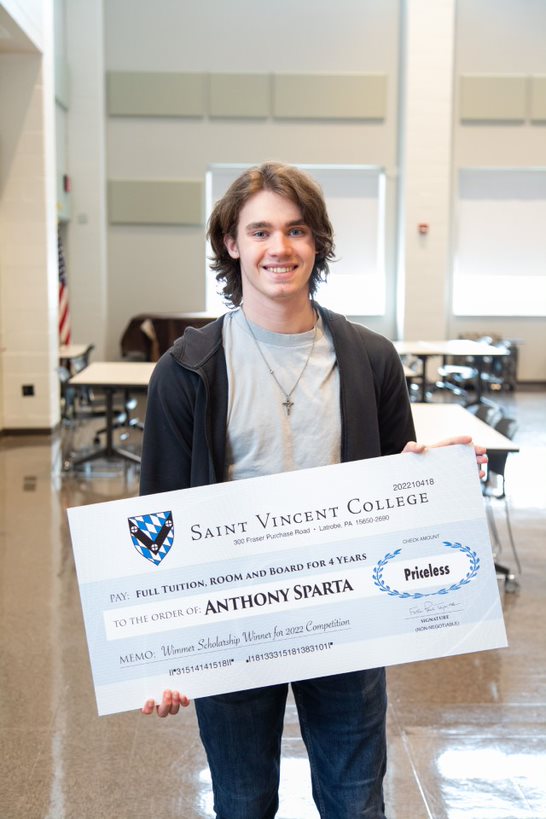 A National Merit Scholarship Finalist, Anthony Sparta has also been recognized as an AP Scholar with Distinction by the College Board and is a member of the National Honor Society.

At school, Anthony enjoys being a member of both the AP Humanities and History Clubs and is the president of his school’s STEM Club in addition to being a member of the Varsity Academic League team. He has been a member of the Pennsylvania Future Problem Solving Team since middle school and has gone to the state finals with the team multiple times. Anthony is active in Mock Trial and will be competing again in the PA Statewide Mock Trial Competition, at which last year he earned recognition as a Top Witness.

Outside of academics, Anthony has been a member of the Varsity Tennis team since 9th grade and volunteers as an instructor for a junior tennis clinic every summer. Additionally, he enjoys working with younger students in his community, serving as a proctor for the Math 24 Competition for local area middle school students and volunteering at a Future Problem Solving Program workshop to introduce new students to the Problem Solving competition.

Anthony is the son of Christopher and Donna Sparta and is a member of Triumph of the Holy Cross Roman Catholic Parish in Jefferson Hills. He plans to study chemistry at Saint Vincent. 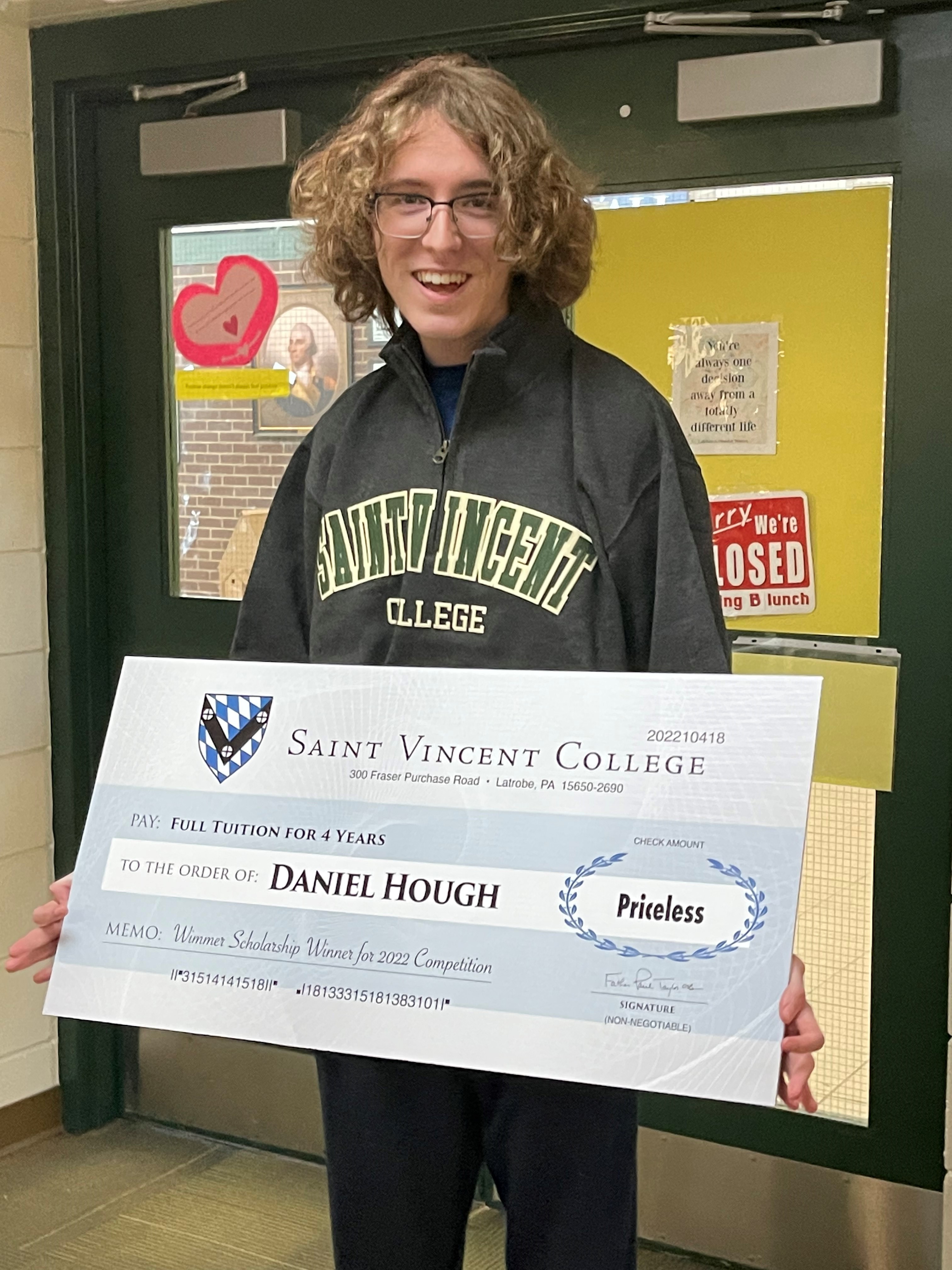 A senior at Penn-Trafford High School, Daniel is a member of the Junior Varsity Tennis Team and Engineering Club. He is an honors student and has been in the AP curriculum throughout high school. Daniel has always loved to read and is a familiar sight around school either accompanied by a book or his Kindle.

Outside of school, he loves to read, play tennis, spend time with his friends and game. Daniel is a passionate animal lover and has actively helped foster well over a hundred cats and kittens with his mother. To his family, he is known as the cat whisperer.

Daniel is the son of Kate and Travis Hough and the youngest of five children. He highly values his personal relationships with others and is devoted to his friends and family. Having excelled in and developed a passion for mathematics and science, Daniel plans to study Computer Science and/or Engineering.

Noah is a senior at Hempfield Area High School – a school that has produced several Wimmer Scholarship Competition winners over the years. He is a National Merit Scholar Finalist and has been recognized by the College Board as an AP Scholar of Distinction. 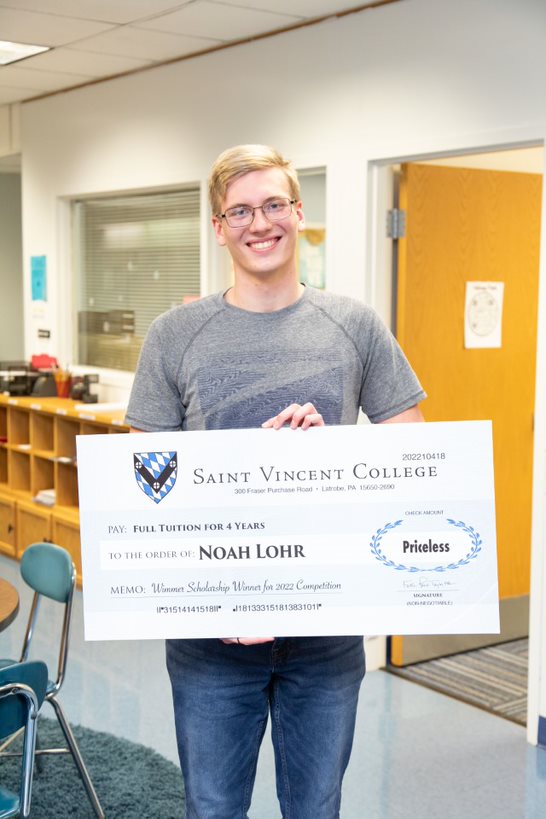 At school, Noah is President of Hempfield’s chapter of the Science National Honor Society and is the captain of the Quiz Team, Department of Energy’s Science Bowl Team and Hometown High-Q Team, which took third place overall last year. He is a member of the Cross-Country Team and is a captain of the Varsity Swim Team, which he’s been on for four years.

An accomplished musician, Noah has been the principal oboist for the Westmoreland Youth Symphony Orchestra for four years. He also enjoys giving back to the youth in the community, volunteering at Outdoor Odyssey, an organization dedicated to mentoring underprivileged children.

Outside of the classroom, Noah enjoys baking bread and has won Best in Show in the junior food division for his bread at the Westmoreland Country Fair in 2018 and 2021. He is the son of Dr. Jason and Sharon Lohr and attends and volunteers at Armbrust Wesleyan Church in Hunker. Noah is currently pursuing EMT certification with plans to major in biochemistry in order to pursue a career in medicine. 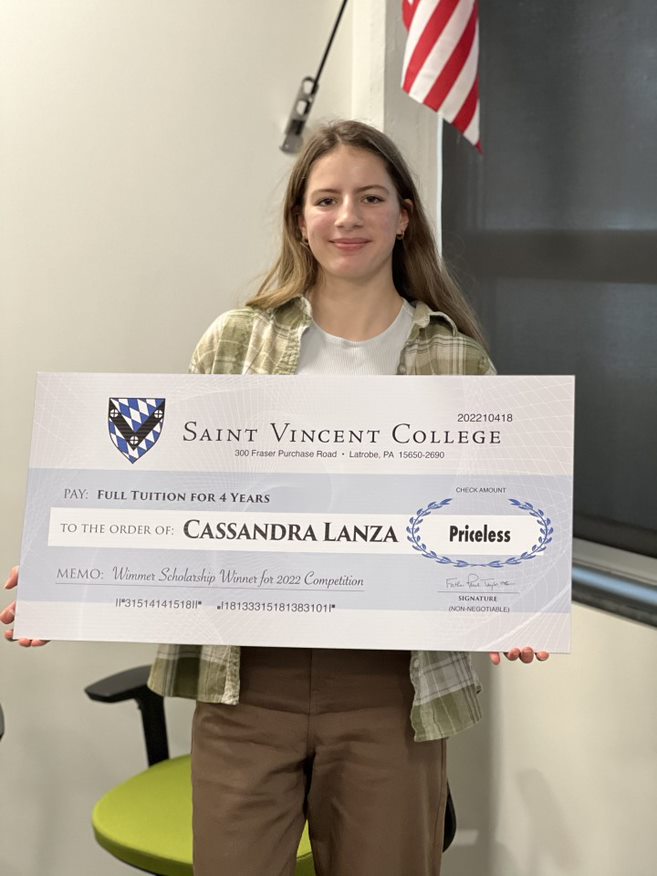 A senior at West Perry High School, Cassandra is a National Merit Scholarship Semi-Finalist and has won the 2022 Commodity Representative Excellence in Service Award and was the winner of the 2019 Scholastic Silver Key in the Humor category. She is currently enrolled in the Gifted Program and is the secretary of her school’s chapter of the National Honor Society.

Cassandra is the first chair clarinet player in concert band and was a PMEA District 7 Band Qualifier in 2020 and 2021 as well as a Region V Qualifier in 2021. She is a member of the Cross-Country Team of which she is captain and for which she has been a District Qualifier every year since 2018 and was MVP from 2018-2020. She also participates in Track and Field, being a Mid-Penn Qualifier for the 3200-meter race in 2019 and 2021 and the MVP in 2021.

An animal lover, Cassandra is a member of the 4-H Alpaca Club and has been the PA Alpaca Princess since 2020. She has also enjoyed programming residential Christmas lights displays to music and is an AutoCAD drafter at NavTech, a civil engineering company.

She is the daughter of David and Sally Lanza and plans to major in computer science and minor in Spanish at Saint Vincent in the fall.

Sara is a senior at Ligonier Valley High School and is the daughter of Michael and Katherine Package.

The scholarship winners are based on their performance on a written examination administered at Saint Vincent in December and January. The 143 students who participated in this year’s exam were college-bound and met the academic qualifications of a minimum 3.75 GPA, as well as a documented SAT score of 1,300 or above or a minimum ACT score of 28. Students with no documented SAT or ACT scores were eligible to sit for the exam if they held a 4.0 GPA and have successfully completed six AP/college courses.

This is the 41st year of the Wimmer Scholarship Competition.

Saint Vincent College’s approach to education is rooted in a core curriculum that provides all students with a broad-based education which provides a breadth of knowledge in the humanities, social sciences, natural sciences, mathematics, philosophy and theology. This interdisciplinary view of that knowledge provides the skills to become life-long learners and leaders in their field.