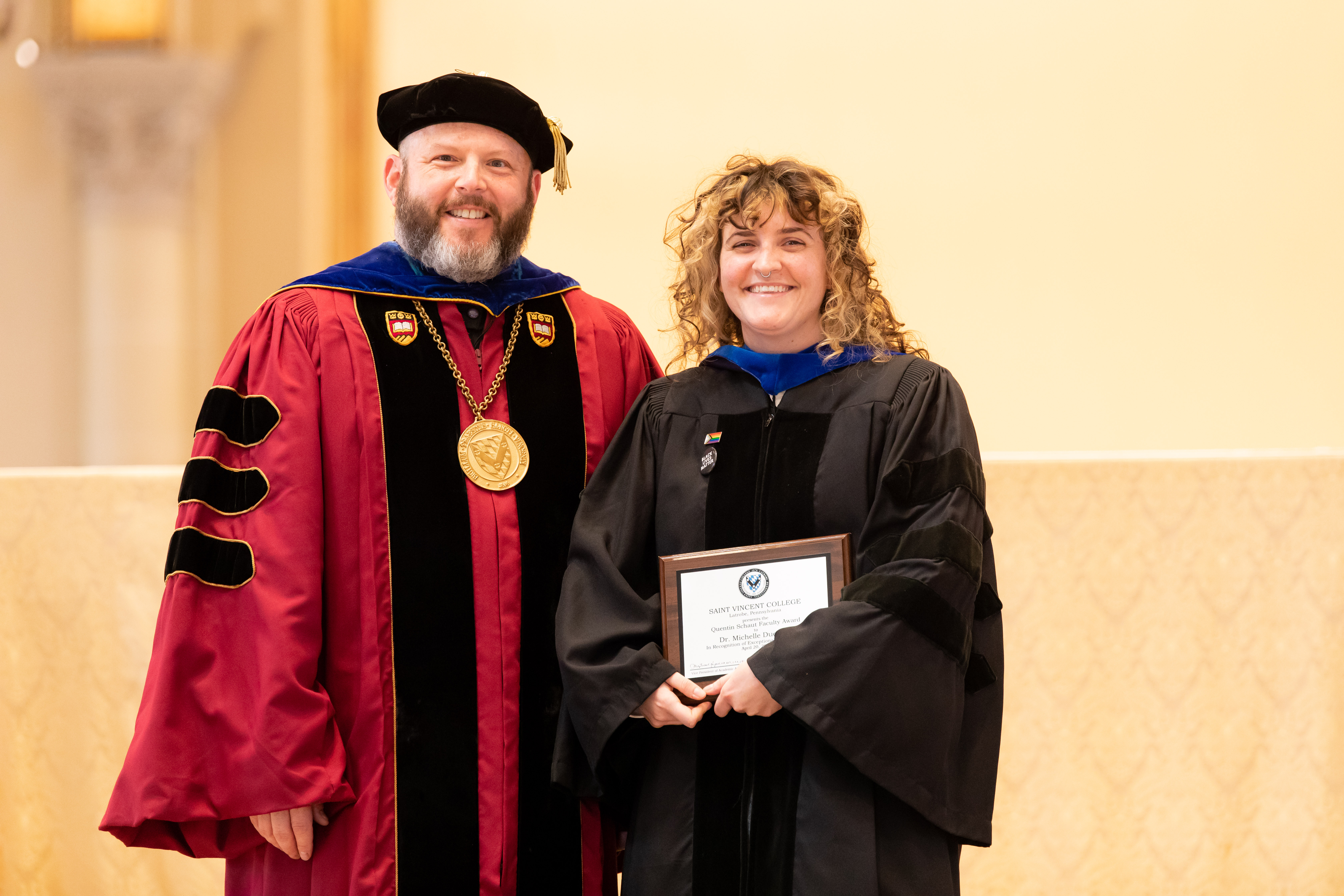 Named in honor of Fr. Quentin Schaut, O.S.B., an English professor and the seventh president of Saint Vincent College, the award recognizes the contributions, leadership and achievements of a junior faculty member to the curriculum and life of the College.

“Dr. Duennes’ teaching is well-received by her students,” said Father Philip Kanfush, O.S.B., interim vice president for academic affairs and professor of education. He noted that students have said that she is deeply passionate about ensuring their success and that she is “one of the most compassionate professors” many students have had.

He remarked on her enthusiasm, mentioning another quote from a student: “Dr. Duennes is extremely enthusiastic about the material, which stimulates student interest in her course. It’s obvious that she cares about her students having the best possible experience in her course. Multiple times, she would stay on campus late to hold review sessions or be there to answer questions before exams.” Father Philip further emphasized this point, saying, “Admittedly, I would have to say that no one can ever doubt Michelle Duennes’ enthusiasm about anything. Ever.”

In her acceptance speech, Duennes explained how love and the loss of her mother during the beginning of her college career are ultimately what brought her to Saint Vincent.

“In the spring of my freshman year of college, my mother was diagnosed with late-stage ovarian cancer, and it would take her life in the fall of my sophomore year,” Duennes explained. She attended Mount Saint Joseph University in Cincinatti, which, according to Duennes, is “very similar to Saint Vincent, except they have nuns instead of monks.”

“I had so much love for my mother, and when she was gone, I didn’t know what to do with it anymore,” Duennes recalled, then saying that she put all of that love, as much as she could, into biology, which helped her to secure two internships at research labs that studied cancer. “I learned everything I could about [cancer],” Duennes said. “Understanding [the] biology of cancer helped me process my grief.”

She continued, affirming the impact her professors had on her decision to become a professor herself: “My professors knew about the loss of my mother, and they really helped me through it. They listened to me, and they accommodated me, and it was this love that they showed for me throughout my entire college career that made me decide at the age of 19 that I also wanted to be a professor at a small, liberal arts college.” 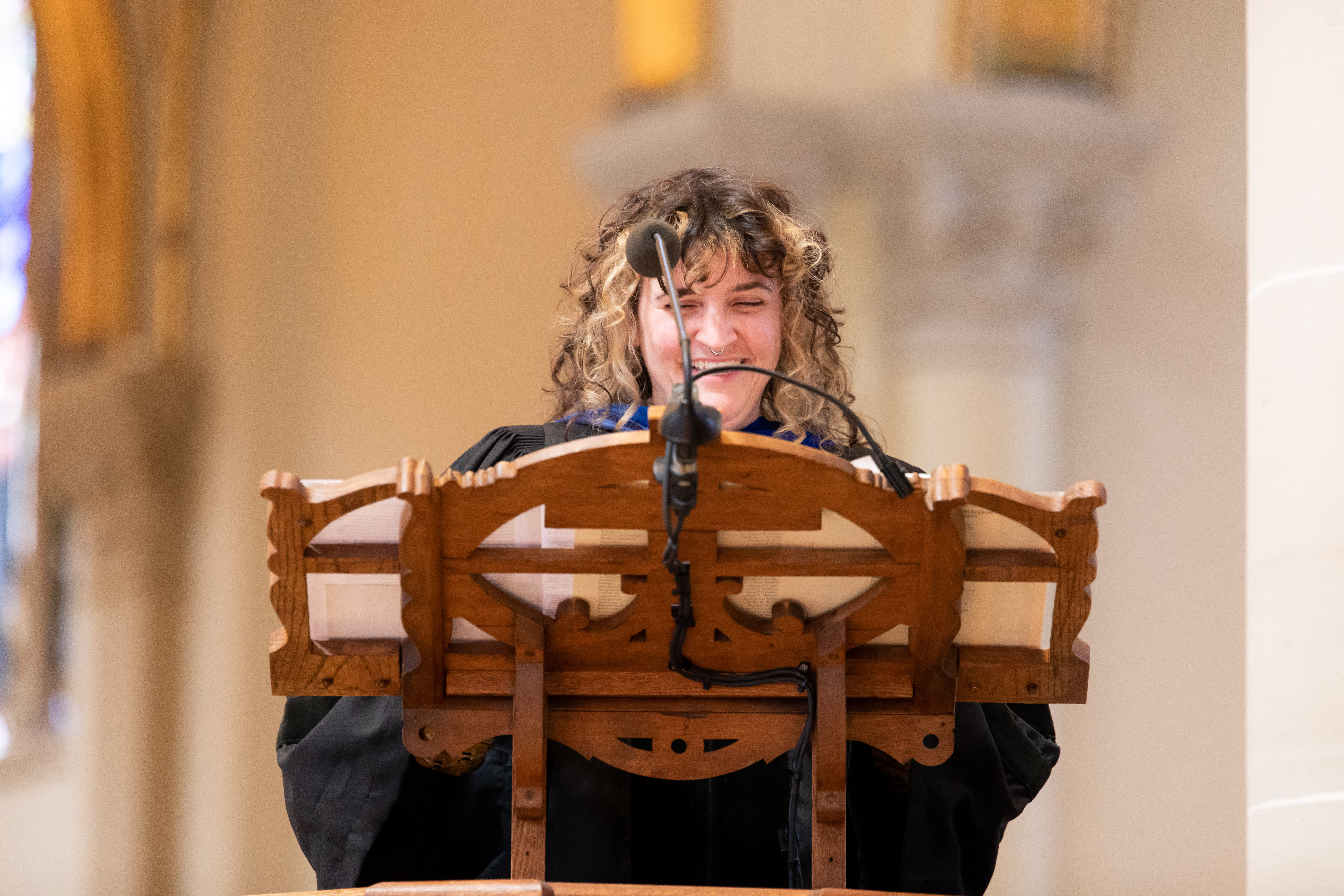 Duennes explained that she has struggled with depression and anxiety, and she reflected on the things that have helped her throughout her adult life, including roller derby and being able to pour so much passion into researching bumblebees all over the world. But, Duennes added that her students at Saint Vincent have helped her more than she’s helped them.

“Working with students here at Saint Vincent has fulfilled me in a way that nothing ever has before. Anyone who knows me knows that I love biology and insects and bumblebees a lot. Like, a lot.

But the love that I have for those topics, it really pales in comparison to the newly-found love I have for my students here. I love you all.”

Duennes joined the Saint Vincent College faculty in 2018. She teaches general biology II, ecology, evolution and invertebrate zoology. She also advises biology majors as they develop, execute, and communicate research for their 3-semester Capstone Research Projects. Students in her lab explore a variety of topics in ecology, evolution, and conservation.

The overarching goal of Duennes’ research is to reveal molecular adaptations and phylogenetic/population genetic history to address how species might react to changing natural and agricultural landscapes. Her research focus is on bees and their conservation. She has studied bumblebees in Honduras, Mexico, Panama, the Arctic Circle and the Sierra Nevada Mountains. Most recently, she was accompanied by a group of eight Saint Vincent students on a research trip to Sequoia National Park to study bumblebees.