WEXFORD, Pa. (May 18) – On Tuesday, May 17, recently graduated Saint Vincent College student-athletes Sydney Green and Cris White were honored at the annual Presidents' Athletic Conference Scholar-Athlete of the Year Banquet, held at the Chadwick. 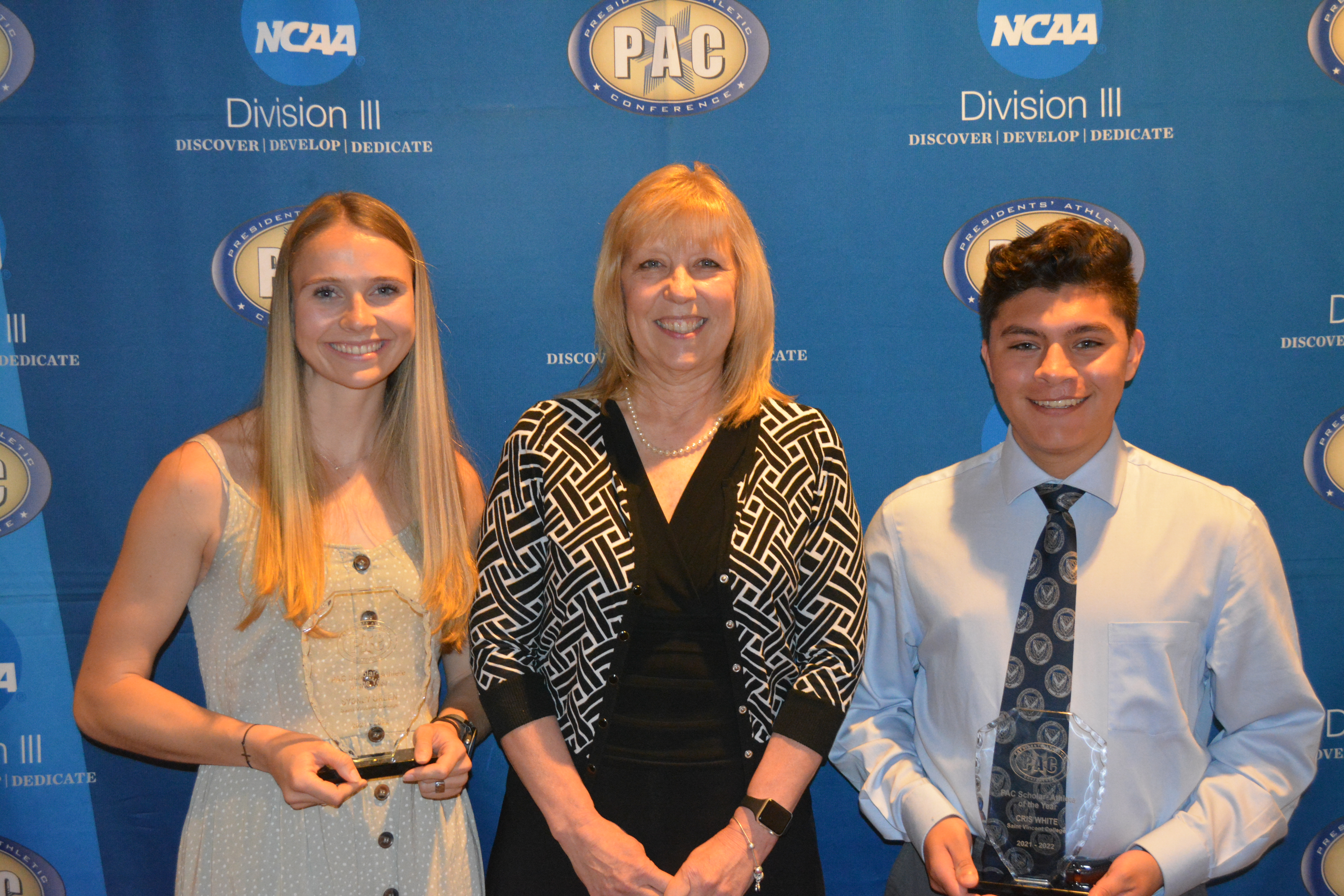 Each of the 10 full-time PAC institutions and its two football affiliate members were represented by some of their most distinguished student-athletes at the event. Established in 2014, the Scholar-Athlete of the Year Banquet honors the conference's student-athletes for their excellence in the classroom, athletic achievement and community service efforts. A four-year Dean's List selection and PAC Academic Honor Roll honoree, Sydney Green graduated from Saint Vincent College with a bachelor's degree in engineering. She has enjoyed a stellar running career with the Bearcats, blossoming into one of the top middle-distance runners in the region. After placing sixth at the PAC Cross Country Championship to earn first team All-PAC honors in the fall, Green has put together a stellar winter and spring on the track. At the 2022 PAC Indoor Track and Field Championships, she won the mile run by a five-second margin, before she placed second in the 800-meter run. This spring, Green established new school records in both the 800 (2:16.06) and 1500 (4:46.22), and went on to again earn a pair of All-PAC nods at the Outdoor Track and Field Championships where she won the 800 and placed second in the 1500. Off the track, Green is a member of the Alpha Lambda Delta Honor Society, served as president of Saint Vincent College's Engineering Club, Women in STEM club and Women in Business club, while she has served as an engineering tutor throughout her time at the College. At the College's May Honors Convocation, Green received the Saint Vincent College President's Award, which is given annually to the one graduating senior who best embodies what SVC values in its students – outstanding academic achievement, student leadership and community service. A native of Greensburg and graduate of Greater Latrobe High School, Sydney has accepted a full-time position with Westinghouse Electric Company as a mechanical engineer in its materials and aging management division. Cris White excelled as a two-way midfielder for the Saint Vincent men's soccer team for four seasons. White served as team captain and was named to the PAC Sportsmanship Team in 2021 after battling through an early-season injury to return to the starting lineup for conference play and scored the game-winning goal against Chatham in his first game back in the lineup. Over his four-year career, White appeared in 44 games with 35 starts and totaled 13 points, on four goals and five assists. Named to the PAC Academic Honor Roll in each of his seasons at Saint Vincent, White graduated with a bachelor of science degree in management and was honored with the College's Award for Academic Excellence in Management at Saint Vincent's Honors Convocation in April. He is a member of the Alpha Lambda Delta and Delta Mu Delta honor societies and served as the president of Saint Vincent College's Operational Excellence Club. White also organized various campus cleanups through the Operational Excellence Club, and led the Central Westmoreland Habitat for Humanity in cleaning up its ReStore by implementing lean manufacturing tools. A native of Natrona Heights, Pennsylvania, White is a graduate of Highlands High School. He has accepted a position as a contracts professional at Bechtel Plant Machinery, Inc., where he will work in supporting the U.S. Navy's fleet. More than 120 people attended this year's PAC Scholar-Athlete of the Year banquet, including presidents, athletic directors, faculty-athletic representatives, coaches and athletic communications professionals from the league's member institutions. PAC commissioner Joe Onderko provided an introduction and served as the emcee.