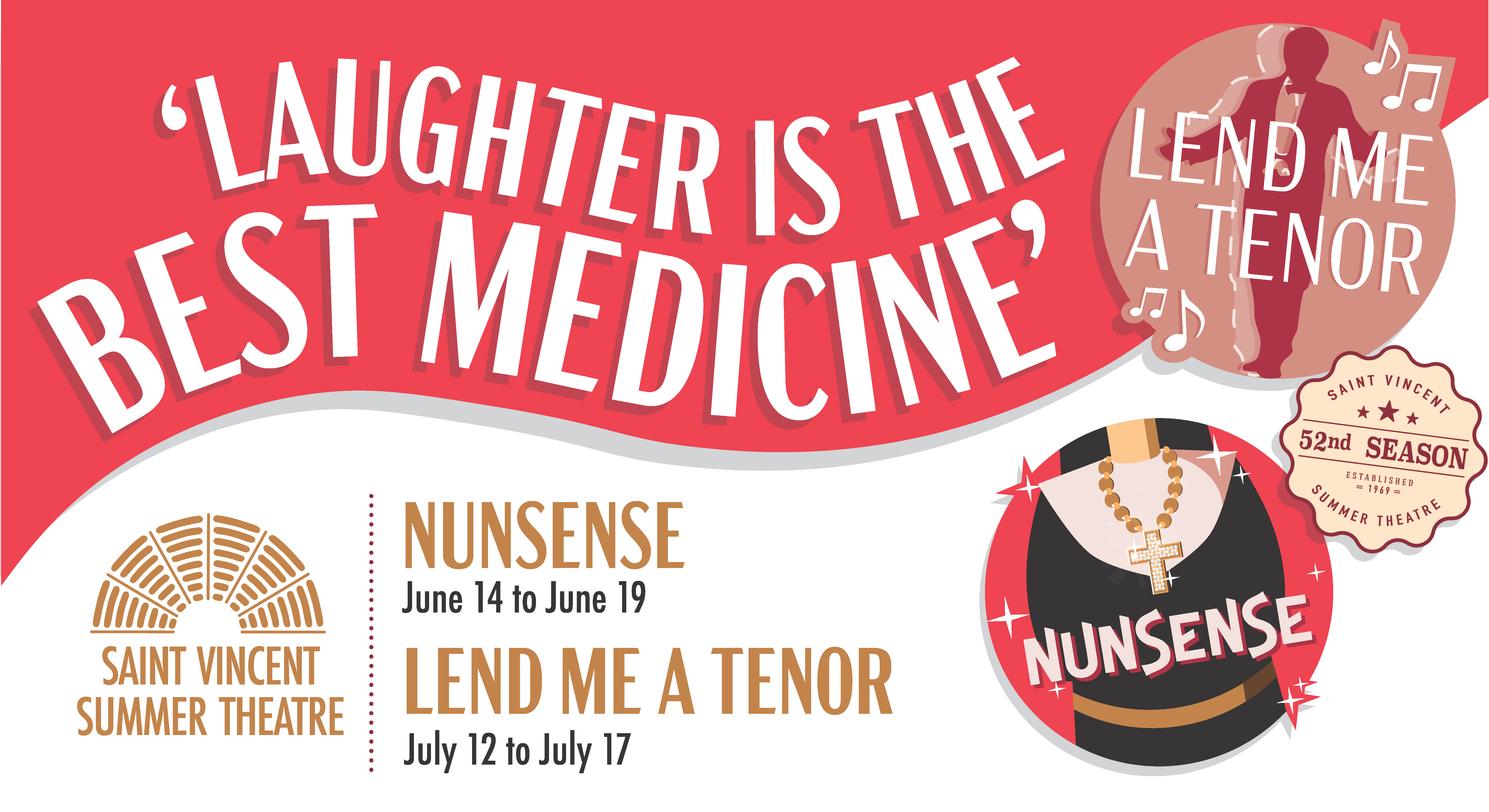 LATROBE, PA – Saint Vincent Summer Theatre (SVST) is set to return this summer for its 52nd season after a two-year intermission due to the COVID-19 pandemic. SVST’s summer season will include two productions: Dan Groggin’s musical, “Nunsense” and Ken Ludwig’s popular farce, “Lend Me a Tenor.”

In Groggin’s “Nunsense,” five of the 19 surviving Little Sisters of Hoboken discover that their cook had accidentally killed the other 52 residents of the convent with her vichyssoise. With no money in the kitty to pay for the burials, they decide to stage a variety show to raise the necessary amount. The entertainment that they present includes wacky solo star turns, madcap dance routines and an audience quiz.

Ludwig’s “Lend Me a Tenor” follows famous tenor Tito Merelli, who has signed on to perform with the Cleveland Opera Company, but through a set of crazy circumstances, he passes out after mixing wine with a huge dose of tranquilizers. Believing the divo is dead, the opera manager, Henry Saunders, taps his assistant, Max, to replace Merelli. Navigating through one catastrophe after the next, Max and Saunders search for a way to save the company's big night.

Lawrence Lesher, Kim McLeod, Matt Sweeney, Daniel Krack, Abby Middleton, Synge Maher and Justin Massetto will star in “Lend Me a Tenor,” which will run from July 12 to July 17.

Both shows are directed by Greggory Brandt, producing artistic director for SVST and assistant professor of theatre at Saint Vincent College, and will take place in the Performing Arts Center, located within the Robert S. Carey Student Center on campus. There will be three matinee (Wednesday, Saturday and Sunday) and five evening (Tuesday through Saturday) performances per production. Complimentary transportation will be provided from the parking areas to the Performing Arts Center. Handicap parking closer to the theater is also available.

“What better way to end the intermission and begin anew than by offering two of the more popular productions among summer theatre audiences. It will be so wonderful to hear the sound of laughter and see so many summer theatre friends again,” Brandt noted.

Tickets for both performances are now available. To purchase tickets for “Nunsense,” visit https://www.showtix4u.com/event-details/64706, and to purchase tickets for “Lend Me a Tenor,” visit https://www.showtix4u.com/event-details/64707. For group rates and additional box office details, call 724-537-8900, or visit www.stvincent.edu/summertheatre.