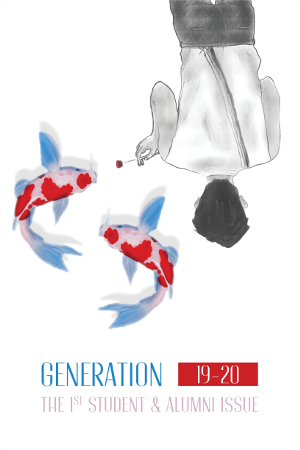 LATROBE, PA -- Saint Vincent College’s literary magazine, Generation, launched its 2019-20 issue on March 27 despite a closed campus, emailing the publication to contributors. The issue is the first to include work of alumni alongside student work, as well as the first to be made available digitally.

Micaela Kreuzwieser, editor-in-chief of Generation and English major from Canfield, Ohio, said, “Our purpose is to provide a medium for members of the Saint Vincent community to view their art and work in print, and this expansion allows us the chance to fulfill that mission even further.”

Established in 1962, Generation is compiled, designed and distributed by students who anonymously choose creative writing and visual art submissions from the Saint Vincent College community.

“Being part of the Generation staff and having my work accepted to the literary magazine was one of the highlights of my undergrad career,” said Chloe Wertz, C’14. “Now that Generation is opening submissions to alumni, I can relive that exciting time and connect with undergrads who are also passionate about writing in a fun and creative way.”

The 2019-20 issue of Generation contains the work of 23 students, eight alumni and two faculty members.

Digital copies of the latest issue of Generation are available online as both PDF and Epub ebook files on the English Department's webpage.