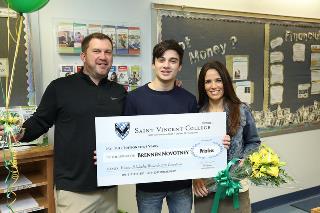 Novotney, a native of Greensburg, has been accepted into Saint Vincent College’s Herbert W. Boyer School of Natural Sciences, Mathematics and Computing with plans to major in biochemistry, while he has also been accepted into Lake Erie College of Osteopathic Medicine’s early acceptance program. A four-year honor student, AP scholar and member of Hempfield’s enrichment program, Novotney serves as secretary of the National Honor Society, while he is also a member of the Science National Honor Society and Interact Club. He is a four-year member of the Hempfield cross country team and has played on the Spartan tennis team, while this spring, he is competing in track and field. Active in the community, he has volunteered at Feeding the Spirit, Outdoor Odyssey, the Salvation Army, You’ve Got a Friend Day and at Redstone Highlands senior living community.

Novotney’s parents, Nathan and Theresa, as well as his grandfather, Frank, are all graduates of Saint Vincent College, while he has two younger brothers, Justin and Colton, and one younger sister, Gianna. They are members of the Blessed Sacrament Cathedral Catholic parish in Greensburg. 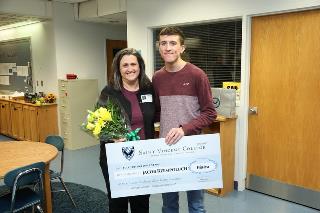 Rzempoluch, a Greensburg native, has been accepted into the Saint Vincent College School of Arts, Humanities and Social Sciences and is considering studying Spanish. The Greensburg native is in Hempfield’s enrichment program and is a four-year honor student and member of the National Honor Society, Spanish Honor Society and the Interact Club, while competing for four years on the Hempfield cross country and track and field teams. As a youth, Rzempoluch was an active member of the Boy Scouts, having served as senior patrol leader and earning the rank of Eagle Scout, and is now a registered leader of his former troop.

The son of Michael and Tammi Rzempoluch, he has one younger sister, Jeanna, and is also a member of the Blessed Sacrament Cathedral Catholic parish, where he was an altar server and active in youth ministry. 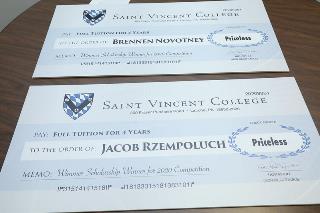 The scholarship winners are based on their performance of a written examination administered at Saint Vincent in November. Students who participated in this year’s exam were college-bound and met the academic qualifications of a minimum 3.25 grade point average and 1170 SAT/24 ACT. This is the 39th year of the scholarship competition.

Saint Vincent College is a four-year, coeducational, Catholic, liberal arts and sciences college sponsored by the Benedictine monks of the Saint Vincent Archabbey. A diverse student population of undergraduate and graduate students hails from 31 U.S. states/territories and 10 foreign countries.

PHOTO 2 (from left to right): Nathan, Brennen and Theresa Novotney

A full photo gallery from the scholarship presentation can be found on the Saint Vincent College Flickr account.