LATROBE, PA — Eulalia Books, a poetry-in-translation publisher housed at Saint Vincent College, has released "Katabasis" by Lucía Estrada, translated by Olivia Lott. Estrada is the two-time recipient of the Bogotá Poetry Prize, most recently in 2017 for “Katabasis,” which was also named a finalist for the 2019 Colombian National Poetry Prize. Lott’s translation is the first full-length collection in English by a Colombian woman poet. 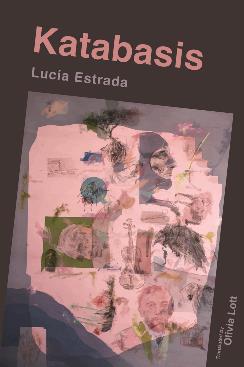 According to poet Rachel Galvin, “Lucía Estrada numbers among a group of celebrated Latin American women poets who unrelentingly explore the darkest crannies of the imagination and the intellect, including Marosa di Girogio, Reina María Rodríguez and Blanca Varela.”

“Katabasis” takes its title from the Greek word for descent, referring to both classical knowledge quests into the underworld by epic heroes and, more broadly, to any journey into madness, darkness and the unknown. The book features cover art titled “Katábasis III,” commissioned from Colombian painter David Robledo.

Lott first met Estrada in Medellín, Colombia, in 2015, and has closely followed her work ever since. “When ‘Katabasis’ came out in 2018, it really caught my attention. It was unlike any poetry collection from Colombia I had read,” Lott said. “I read this book as deeply in dialogue with Colombia's decades-long Armed Conflict (in which the U.S. was heavily involved), the osmosis-like quality of living your whole life in an active or dormant war zone. It’s urgent, so I felt the need to urgently translate it.”

Translator Katherine M. Hedeen said, “Katabasis’s descent into dissent gives us ‘a reason to move through the world’: Dissent from imperialist and neo-colonialist notions of Colombia and its literature, dissent from the Latin American poetry in translation canon, dissent from the translator’s invisibility. This impressive book of firsts is exactly the kind of translation work I’m most interested in.”

The book trailer for “Katabasis” can be viewed on YouTube at https://www.youtube.com/watch?v=GCbe8eM3xBw.

Eulalia Books is a part of Saint Vincent College’s literary translation program, a conjunctive effort of the English and modern language departments. Its mission is to publish modern and contemporary poets who do not yet have a collection translated into English.

PHOTO: The cover of Katabasis, by Lucía Estrada, translated by Olivia Lott.