Andrew Kunz to Serve as Treasurer of SGA Executive Board 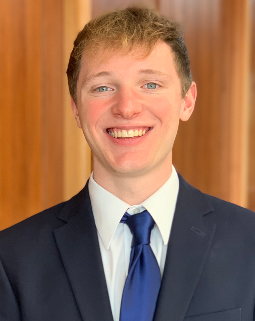 A graduate of Quigley Catholic High School, Kunz is a fellow in Saint Vincent College’s Benedictine Leadership Studies program, while he is also a member of the Bearcat men’s soccer team and is active in the Pre-Law Society and Mock Trial Club as well as a student ambassador for the Office of Admission and a prefect in Gerard Hall.

Kunz said he applied for the SGA post because it would allow him to gain hands-on experience in his field of study while helping his fellow students.

“Being a newly declared finance major,” said Kunz, “I believe this position will allow me to perform first-hand the skills I am learning in the classroom. As treasurer, I hope to maintain a balanced budget that includes enough money for the clubs which request funding, as well as sufficient funding for on-campus events.

“I want to help improve student life as we hopefully begin to return to a sense of normalcy in the coming months.”

During his college search, Kunz was attracted to Saint Vincent for a number of reasons, while he also received some assistance from a few family members while making his college decision.

“I was attracted by the competitiveness and opportunities that the McKenna School offers its students, while I also appreciate the Catholic value of Saint Vincent,” he said. “Saint Vincent also gave me the opportunity to continue to play soccer competitively. My uncle Daniel, a 1999 graduate, and my brother, Eddie, a 2019 graduate, also helped in the decision-making process.”

After he completes his undergraduate education at Saint Vincent, Kunz plans to pursue a job in corporate finance and attend law school.

He is the son of Joseph and Christine Kunz of Cranberry Township and a member of Saint Alphonsus Roman Catholic Parish in Wexford.