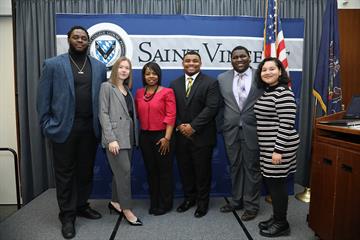 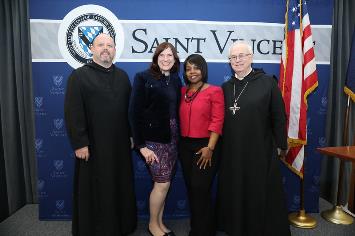 Saint Vincent associate professor of English Michelle Gil-Montero announced the winners of the school’s fifth annual Martin Luther King Jr. Poetry Competition. Senior Julia Snyder, an English major from Murrysville, won first prize with her poem “Insomnia,” which Gil-Montero recited to the audience. The poem “The Woman and the Man,” by Samantha Hilyer, a sophomore English major from Patton, took second place, while “Prisoner of Flesh and Mind,” by Nichole Fratrich, a junior English education major from Seward, placed third.

Kyle Watson, a junior from Essex, Maryland and president of the SVC Uniting All People Club, closed out the ceremony with final remarks.

The Martin Luther King Jr. Celebration Dinner was part of Saint Vincent College’s commemoration of the Week of Prayer for Christian Unity, which features a number of events, lectures and worship services from Jan. 18-25. The complete schedule of the week’s activities can be found online at this link.

In 1986, I was 6 years old.  I recall walking past the sitting room at home and being confused by the images that appeared on the television screen at that moment.  The images were of black people chained together walking, and then being whipped by white people.  Given that I attended a predominantly white, Catholic school, I was completely disturbed and uncertain about what I had witnessed.  Consequently, after being exposed to those images, I sought out my parents elsewhere in the house to inquire about what was happening.  My mother was the first parent I had encountered, so she had the task of fielding the barrage of questions. 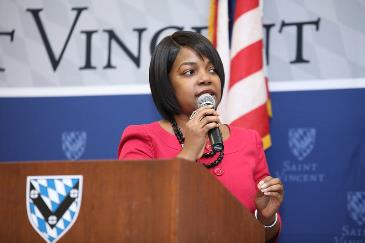 In that instance, my mother had to explain to me the history of blacks in the United States.  Despite attending a predominantly white school with peers and teachers who somewhat accepted me, circumstances were not always that way for people who looked like us.  For the first time, I realized I was different.  Of course, my skin color had previously signaled this difference every day that I went to school, but my formulation of the difference stopped there.  The conversation with my mother that day expanded my understanding of that difference, resulting in a desire to know more.

Following the day that I became aware of the injustices wrought against black people, I developed an insatiable need to understand when and why such hatred developed.  So, my mother took me to the Swissvale Library to facilitate the process of learning about our past.  Each week, I reviewed books which explained African history, slavery, the underground railroad, and the civil rights movement.  I watched movies and documentaries which outlined the struggle that blacks had undergone to be considered equal in the United States.  Each time I read a book or watched a documentary I experienced emotions that ranged from sadness, to anger, to pride.  Thankfully, my parents were present whenever I needed to process my feelings.

Early exposure to the reality that persons who belong to my culture were once and still are discriminated against on the basis of their skin color, created a sensitivity to the plight others faced with similar injustices.  In fact, having gone through this process compelled me to try to refrain from holding unfair judgments against others who hold varying beliefs and values different than mine.

As a part of my research on the history of African Americans and those who fought diligently to secure equality for people just like me, I had come across the work Dr. Martin Luther King, Jr.  As I reflect upon his desire to be a change agent, I am compelled to notice and appreciate that he allowed Jesus to “use his boat.” Now you may be wondering about the boat to which I am referring because there has never been any mention of boats or him having ownership of one,or allowing Jesus to use it for that matter.  But, metaphorically speaking, I submit that Dr. King did in fact possess a boat and he allowed Christ to use it.

To better understand this principle, I want to summarize a portion of scripture which may be found in the Gospel of Luke, Chapter 5:1-11.  The word of God states that as Jesus stood by the lake of Gennesaret, there was a large crowd pressing to hear the word of God.  He noticed two boats belonging to some fishermen.  He entered the boat of Simon Peter and asked to use his boat.  He asked Simon Peter to push out from the shore, to which Simon Peter agreed.  From there, Jesus was able to teach the large crowd from the boat. Following that moment, Jesus instructed Simon Peter to let down his net on a different side of the boat.  Simon Peter demonstrated skepticism because he had been unsuccessful with his previous methods, however, he complied.  Much to his surprise, Simon Peter caught more fish than he had ever done in his career, all because 1) He was willing to allow Jesus to use his boat and 2) He took a risk and obediently followed Christ’s instructions, even though it was unconventional.  Consequently, Simon Peter had acquired so much, that he could not keep it to himself. He had to call for help from his partners and in essence was able to be a blessing to others. Why? Because he allowed Jesus to use his boat.

And Dr. King could only have done that by following his own recommendations offered in his sermon delivered at the Dexter Avenue Baptist Church entitled, “Conquering Self-Centeredness.” In it, he offered two principles to conquer self-centeredness:

He did not lead an egocentric, self-centered life because he found a cause and gave his life over to it. Furthermore, he recognized that the position in life he held at that moment was because somebody, Jesus, had helped him get there.

Herein lies the matter and charge to everyone sitting in this space. Our lives are not our own to squander away on account of self-centeredness. We are here for a purpose.  In some way we need to position ourselves to allow our boats, our lives, to bring quality and substance and peace to the lives of others.  It doesn’t have to be done on a grand stage, but it can be as simple as offering kindness, empathy, warmth, and understanding. It can be in the form of helping to connect others with resources.  Or it can be in the vein of speaking out until others find the strength to speak for themselves.

In 2020 I am 41 going on 42.  Sometimes I walk past my television in my living room and see awful injustices still being wrought against Black people.  And in addition to Black people it is against a variety of people for a variety of reasons.  My mother is no longer here for me inquire about what I see; But Jesus is. And so, because of what I see, He doesn’t have to ask me to use my boat; I offer it freely.  And I am inspired to do so based on his example and the example of Dr. King.  The question becomes, “In this lifetime, what will you do with your boat?” I am proud to see that Saint Vincent College is offering their boat by ensuring that a day such as this remains relevant in a society that seems to be straying away from keeping the dream of Dr. King alive. It is important to never forget what Dr. King stood for and fought for.  We have made some progress, but there is still work to be done. And that work can be carried out through all of us in some way!