LATROBE, PA.— A billboard designed by Saint Vincent College professor of art Ben Schachter has been chosen for the Emma Lazarus Art Award by the organization Combat Anti-Semitism. 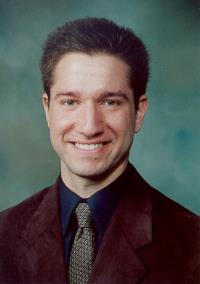 The inaugural Emma Lazarus Art Award recognizes artwork that creates iconic imagery that visually embodies the 21st-century movement to end anti-Semitism. The award is named in honor of Emma Lazarus, a 19th-century Jewish activist who advocated for a Jewish homeland and for persecuted Jews seeking refuge from anti-Semitism in Europe. She is best known for her poem “The New Colossus,” which transformed the Statue of Liberty into an icon of refuge for those fleeing persecution. The poem is inscribed at the base of the statue.

“The organization has received a lot of support from a range of Jewish organizations,” said Schachter. “It’s an honor to be recognized for my design with the Emma Lazarus Award.”

Schachter’s billboard design revolves around the adage, “An apple a day keeps the doctor away,” as he urges others to fight anti-Semitism each and every day.

“If we fight anti-Semitism every day,” he said, “we strengthen our communities and support the values of free association and freedom of religion. Anti-Semitism comes from the political right, the political left and from other places, including Jihadist Islamic groups. Jews have been attacked in France and even in Pittsburgh, where I live.”

Schachter will be presented with the award at a ceremony in Philadelphia on March 15. This marks the first year of Combat Anti-Semitism’s Emma Lazarus Award. In addition to the billboard category, awards are also given for best poetry, best graffiti/street art and best cartoon/comic.

Launched in 2019, Combat Anti-Semitism (CAS) is a non-partisan, global grassroots movement of individuals and organizations from all religions and faiths united around the goal of ending anti-Semitism. More than 180 organizations and 150,000 people have joined the movement by signing its pledge, which draws upon the International Holocaust Remembrance Alliance’s international definition of anti-Semitism and its list of specific behaviors used to discriminate against the Jewish people and the State of Israel.

Schachter, who holds a bachelor’s degree from Wesleyan University and both an M.S. and M.F.A. from Pratt Institute, has been a member of the Saint Vincent College faculty since 2003. He teaches a wide array of courses in the College’s Art Department, spanning drawing, painting, digital art, two- and three-dimensional design, architecture and art history.