Mass for the Blessing of Archabbot Martin Available for Viewing 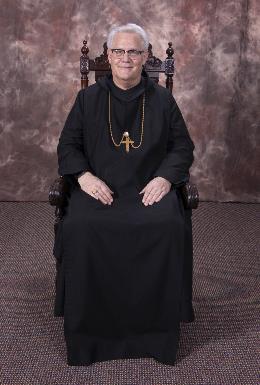 A monk of Saint Vincent Archabbey for 40 years, Archabbot Martin previously served as the 14th president of Saint Vincent College from 1995-2000. Most recently, he served as administrator of the MACH1 (Monaca, Aliquippa, Center, Hopewell) Parish Grouping in the Diocese of Pittsburgh. Previously, he has served in the Diocese of Greensburg as pastor of Saint Martin Parish, New Derry (2001-08), while from 2008-13, he was pastor of Saint Bruno Parish, South Greensburg, and administrator of Saint Benedict Parish, Marguerite.

The archabbot is the spiritual head and Father of Saint Vincent Archabbey, the first Benedictine monastery in the U.S. The Saint Vincent monastic community is comprised of more than 150 monks, who are priests or brothers. They serve at Benedictine Priory in Savannah, Georgia; Wimmer Priory in Taipei, Taiwan; and São Bento Priory in Vinhedo, Brazil. Saint Vincent Benedictines also operate Benedictine Military School in Savannah and the Roman Catholic campus ministry program at Penn State University, while they serve in parishes in Georgia, Virginia and Maryland as well as the Pennsylvania dioceses of Greensburg, Altoona-Johnstown, Pittsburgh and Erie.

An archabbot is an ordinary of self-governing monastery, in the tradition of Saint Benedict and his Rule for Benedictine monasteries. His role to the monks is equivalent to that between a bishop and his people. The archabbot is a prelate in the Roman Catholic Church and is entitled to wear a ring, pectoral cross and mitre, and is entitled to carry the crozier (or the pastoral staff).

A native of Barberton, Ohio, Archabbot Martin earned a bachelor’s degree in business administration, with a major in accounting and minor in computer science, from Temple University in 1978. He went on to earn an MBA from Bowling Green University (1984), a master of divinity degree from Saint Vincent Seminary (1984) and a Juris Doctor degree from the University of Pennsylvania Law School (1989).

Along with the Abbatial Blessing of Archabbot Martin, three additional events will be streamed live by Saint Vincent Archabbey Friday, July 10, and Saturday, July 11.

At morning prayer at 6:15 a.m. on Friday, July 10, two Saint Vincent College graduates – Alex “Jimmy” Rosa, C’20, and Douglas John Hough, C’18 - will officially enter the monastery at Saint Vincent Archabbey as novices. They will spend a year in prayer and discernment as they determine their vocations as Benedictine monks. The event can be streamed live at https://vimeo.com/436171142.

Also on Friday, July 10, at 5 p.m., the Saint Vincent monastic community will receive the simple vows of Br. Francisco Whitaker, O.S.B., while eight junior monks will renew their temporary vows. The event can be viewed live at https://vimeo.com/436173875.

At 10 a.m. on Saturday, July 11, the Feast of Saint Benedict, Archabbot Martin will receive solemn vows (vows for life) of Br. Placid Sellers, O.S.B. This event will be streamed live at https://vimeo.com/436174988.