LATROBE, PA – Dr. Jeff Mallory, C’06, G’13, Saint Vincent College executive vice president and chief operating officer, has been named to the 2020 PUMP/Pittsburgh Magazine 40 Under 40 list, which recognizes the creativity, vision and passion of Pittsburgh-area professionals under the age of 40. 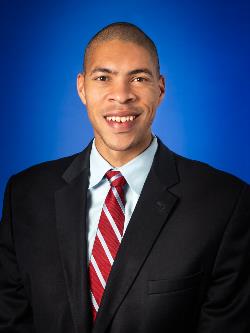 As a 40 Under 40 honoree, Mallory will be featured in the November issue of Pittsburgh Magazine and will be recognized at the annual 40 Under 40 celebration. He was chosen from a nomination pool of more than 200 submissions, which were reviewed by a panel of past 40 Under 40 winners, community leaders and program hosts and sponsors.

Prior to his Aug. 1 appointment as executive vice president at Saint Vincent College, Mallory worked for six years as an administrator at Duquesne University. From 2014-18, he served as Duquesne’s director of diversity and inclusion before being promoted to assistant vice president for diversity, inclusion and student advancement in 2018.

At Duquesne, Mallory successfully led the Office of Diversity and Inclusion in its efforts to enhance its engagement with alumni, develop relationships with more than 60 different Pittsburgh corporations, strengthen its on-campus relationships with students and faculty and raise more than $600,000 for student scholarships.  As assistant vice president, Mallory continued to work tirelessly as an advocate for diverse students and families, while also coordinating the promotion of cultural awareness programming among faculty and staff and collaborating with university departments and organizations to provide social and cultural programming and career planning. His work provided tangible results, among which was achieving a retention rate of nearly 90 percent and doubling the school’s annual incoming classes of minority students from nine to 18 percent.

He also was co-founder of the Greater Pittsburgh Higher Education Diversity Consortium, a networking organization for college professionals and executives in southwestern Pennsylvania which focuses on diversity, inclusion and multicultural affairs. He continues to serve as the president emeritus of the consortium, which is comprised of 16 institutions.

Mallory completed both his undergraduate and graduate work at Saint Vincent College, earning a bachelor’s degree in public policy analysis with minors in history and sociology, before earning a master’s degree in management: operational excellence. He was awarded a doctorate in educational leadership from Duquesne in 2019.

Mallory and his wife, Amy (C’04, G’06, G’11), reside in Unity Township and are the proud parents of daughters Kate and Brooke, and son, Reed.

View Pittsburgh Magazine's profile on Mallory at this link.