LATROBE, PA – Long known as Saint Vincent College’s resident bird expert, associate professor of biology Dr. James Kellam has been involved in the study of a different animal throughout the summer.

Kellam and senior student Ian Tracey have teamed up to study the effectiveness of goats in controlling the growth of the noxious weed lespedeza at the Municipal Authority of Westmoreland County’s (MAWC) Beaver Run Reservoir near Saltsburg. The reservoir serves as the source of supply for its George R. Sweeney Water Treatment Plant, which provides drinking water for more than 150,000 residents throughout the county.

For the study, goats are being deployed to eat lespedeza plants at Beaver Run. Their fecal samples will then be collected by Tracey and taken to the greenhouse outside of the Sis and Herman Dupré Science Pavilion, where they will be mixed with potting soil. Tracey will then monitor the potting soil to determine whether the seeds successfully germinate or if they were killed by the digestive tracts of the goats.

In the fall, new seedlings will be planted as part of the MAWC’s efforts to increase tree cover at the reservoir and their growth will be continually monitored.

“We want to make sure we identify and overcome any obstacles to tree growth in order to ensure our reforestation goals,” she said. “This goat study will allow us to make data-based decisions to ensure a thoughtful, well-informed approach to overcoming obstacles on the path to meeting these goals.” 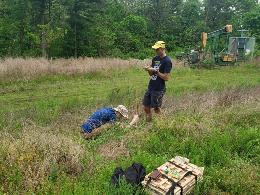 Tracey, a biology major and history minor from Pittsburgh, explained the multi-faceted project.

“We looked at the lespedeza height before and after goat treatment,” he said, “and will compare that to the control, where no goats are. We want to see if the species diversity increases due to the lespedeza being removed, which frees up more resources and allows more species to flourish. And, finally, we’re going to see if the goats’ intestinal tract can destroy the seeds. That would be fantastic.”

The study was born during a bird-watching excursion Kellam made to Beaver Run in January, where he first met Blood.

“After we talked about birds and my job at the College,” recounted Kellam, “she wondered if any Saint Vincent students may be interested in studying lespedeza on MAWC lands adjacent to the reservoir. I said that I thought I could find someone to help her. Laura already had a rough idea of what should be done, but wanted our involvement to ensure the study was done with scientific rigor.”

“I jumped at the chance to ask about potential collaborations with a few different projects,” said Blood. “The timing seemed to line up well with Dr. Kellam’s student projects and the goat project seemed like the best fit.”

Over the subsequent weeks, Kellam met with his students who were assigned to do research and after gauging their interests and Tracey jumped at the chance to take part in the lespedeza study.

“I have always been interested in botany,” said Tracey. “For example, in high school, I planted a seed of corn that eventually grew to more than six feet tall. There is also a big patch of invasive plants - Japanese knotweed - behind our house, and I’ve tried many methods of eradicating them, which have proved useless. So, when I expressed this interest to Dr. Kellam, I was excited when he mentioned that he had a project that was perfect for me.”

The practice of using goats to control vegetation is becoming more commonplace and Tracey feels that this is due to a multitude of reasons. 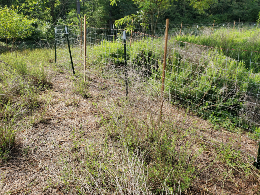 “There really are not any perfect techniques for getting rid of invasive plants,” added Kellam. In addition to pesticides and physical labor, he mentioned that a controlled burn of vegetation is risky and expensive, while mechanical removal by mowing and cutting would only be temporary.

“Goats are relatively inexpensive and economical. Our study will determine how effective they are, both in the short term and longer term.”

While controlling the growth of invasive weeds such as lespedeza is an important step in reforestation efforts, Tracey pointed out that it is also imperative to properly plan the planting of new trees.

“There have been many studies regarding this topic,” said Tracey, “and one of the things I noticed that remediation efforts often get wrong is the process of planting trees. This is far too commonly a second thought. The plants are sort of picked out randomly without regard to biodiversity, or they are just placed in a grid-like fashion. That’s not a natural formation. If the land is going to be remediated, the plants need to be diverse and placed in a way that’s as close to nature as possible. Biodiversity is important because it encourages resilience. If the trees are all the same species, if one gets sick and dies, they all get sick and die.” 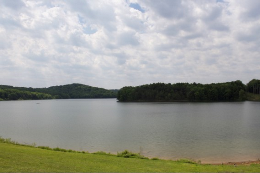 Blood said that the study will be a major factor in determining whether the MAWC will permanently use goats to control growth as it looks to meet its reforestation goals to help protect, preserve and improve water quality and she lauded the work of Tracey and Kellam.

“Ian and Dr. Kellam have been great to work with,” she said. “We had to have several virtual meetings and have had to be very adaptable with the impacts of COVID-19, the weather and growth rates. They are very hard workers. Ian is extremely ambitious and has exceeded my expectations of the amount of work he can get done in a day. He is very excited about botany and it has been a joy to share my past history of botany with him and Dr. Kellam.”

PHOTO 4: The goats in action at the Beaver Run Reservoir

PHOTO 5: The difference in vegetation after the goat treatment (left side of fence) and the section that did not receive goats