A native of Monroeville, Horomanski was awarded the scholarship, valued at more than $145,000, after placing in the top five in the Scholarship Competition, which drew 155 entrants. Saint Vincent College associate director of admission, Melissa Sobek, surprised Horomanski with the award in “prize patrol” fashion at Gateway High School. 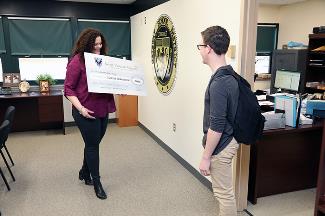 A National Merit Scholarship semifinalist, Horomanski is a vice-president of the Science Club, National Honor Society and marching band at Gateway, while he is a four-year member of the Academic Challenge Team and the percussionist wind ensemble and two-year member of Gateway’s Hometown High-Q Team.

Outside of the classroom, Horomanski is a member of the Boy Scouts of America, having recently completed his Eagle Scout project. He enjoys hunting, hiking and camping - once completing a 10-day backpacking excursion through the mountains of Colorado and New Mexico - while he is an award-winning shooter, earning the 2019 Distinguished Rifleman’s badge.

The son of Curtis and Patti Jo Horomanski, he has four older sisters and is a member of Christ the Divine Shepherd Catholic Parish in Monroeville, where he is an altar server.

The scholarship winners are based on their performance of a written examination administered at Saint Vincent in November. The 155 students who participated in this year’s exam were college-bound and met the academic qualifications of a minimum 3.25 grade point average and 1170 SAT/24 ACT. This is the 39th year of the scholarship competition. 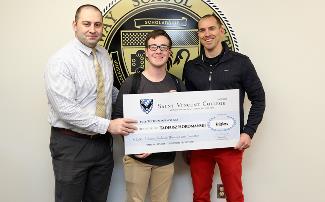 Saint Vincent College’s approach to education is rooted in a core curriculum that provides all students with a broad-based education which provides a breadth of knowledge in the humanities, social sciences, natural sciences, mathematics, philosophy and theology. This interdisciplinary view of that knowledge provides the skills to become life-long learners and leaders in their field.