LATROBE, PA — Stephanie Murray, who graduated from Saint Vincent College in 2013 with degrees in economics and English, recently saw two pieces published in national outlets The Washington Post and The Guardian.

Murray’s article in The Washington Post concerned a fitness center surviving the COVID-19 quarantine while she wrote an opinion piece on the value of parenting experience in The Guardian. 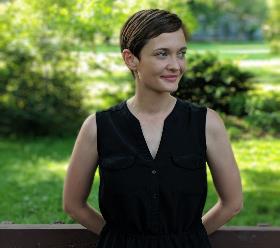 Murray’s recent articles are only the latest in a thriving writing career. She has written more than 75 articles on topics such as resilience, self care and social media for Verily Magazine, a women’s fashion and lifestyle publication, and she has published additional work in Reason, Aleteia, Motherfigure, and top Medium publications, such as The Startup, The Ascent and The Writing Cooperative.

According to Murray, her studies at Saint Vincent were crucial to every step of her professional experience. “SVC is where I was first introduced to and fell in love with the creative process of telling a true story,” she said, crediting multiple faculty members in the English department.

“Through Professor Michelle Gil-Montero’s creative nonfiction workshops, I started to develop an understanding of what makes for a compelling essay,” Murray said. “Also, a lot of the writing I’ve done is analysis and commentary, which I learned to do in literature and literary criticism courses at SVC, and Dr. Snyder’s Intermediate Writing class seriously leveled up my knowledge of how words work.”

Murray’s interests do not stop at writing, though. She continues to use her background in economics in her writing, as well as in public policy research and analysis.

“My studies in economics taught me to think critically and methodically about human behavior — how we respond to incentives, how seemingly small policy changes play out in big ways in individual decision-making — and that’s a really important part of writing about the real world,” Murray said.

In 2018, Murray completed her master of public affairs degree at the University of Wisconsin-Madison, where she garnered the school’s Penniman Prize for an analysis of potential approaches to combating the U.S. opioid epidemic. Murray went on to work for the Wisconsin Policy Forum, leading research on a comparative analysis of municipal funding structures across states.

Through her freelance work, Murray unites her enthusiasm for both economics and English. “Freelance writing allows me to indulge my interest in economic and policy issues, as well as my desire to tell stories and think through things in creative and compelling ways. It’s a kind of fulfillment I personally haven’t been able to find in other kinds of work."

And despite her many accomplishments, Murray remains modest. “Writing is a tough industry to break into, but it doesn’t require brilliance. Just persistence and humility,” she said.

Read Murray’s latest articles in The Washington Post and The Guardian, and find her on her website at www.stephaniehmurray.com.