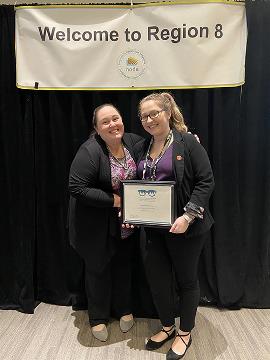 Borges was honored in March at NODA’s Region 8 Conference in Galloway Township, New Jersey. The region is comprised of colleges and universities from Pennsylvania, New Jersey, Maryland, Delaware, Virginia, West Virginia and Washington, D.C. The award recognizes one graduate student for his or her contribution to their campus orientation, transition, retention program and staff success.

A native of Bethlehem, Borges has spent the past two years at Saint Vincent College while completing her graduate studies in the Student Affairs in Higher Education master’s program at Indiana University of Pennsylvania, from which she will graduate May 8.

At Saint Vincent College, Borges has handled a number of responsibilities in the Office of Campus and Multicultural Life. In addition to helping to advise the Activities Programming Board (APB), which hosts more than 30 events each semester, she has overseen the 60 student clubs and organizations, assisted with hosting duties of guest speakers and helped manage the College’s annual Orientation Program.

“Anna has incredible dedication and heart, especially when she is working in her passions,” said Deanna Wicks, C’09, director of campus life. “Her ability to support our students comes from a place of love and care, so it is absolutely genuine, which makes her successful. She is invested in every student and is constantly looking for new ways to support and inspire. She is successful because she cares.”

Prior to her two-year stint at Saint Vincent College, Borges was heavily involved in campus life as an undergraduate student at The Catholic University of America, from which she graduated with a degree in psychology.

“I was very involved on campus and held many leadership positions within the organizations I was a part of,” she recalled. “I was offered a job working in (Catholic’s) Office of Campus Activities, which is where I fell in love with campus life. It was through this role that I found out that I could get a master’s in student affairs and work for a campus life department as a full-time job, which led me to my graduate assistantship at SVC.”

After gaining such extensive experience in the field, both as an undergraduate and graduate student, Borges’ passion for working in student affairs has continued to grow.

“One of my favorite things about working with campus life is how fun and exciting it is to plan programs for students,” she said. “Working with the students at Saint Vincent, I have been able to see the amazing, creative ideas that they have and help them to make into realities. Campus life also never has a dull moment and I thoroughly enjoy the hustle and bustle! We truly are a little family and I love being able to help create that atmosphere within our office.”

Wicks noted that the NODA Outstanding Graduate Student Award is typically given to candidates who are primarily involved in orientation programming, which is why Borges was surprised with her selection.

“I knew that I had been nominated but I truly didn’t believe I was going to win the award,” said Borges. “There were so many other great graduate students who had been nominated, all of whom were great candidates and most of whom solely focus on orientation. When they called my name as the winner, I was completely in shock. Deanna had to tell me to go up on stage. I truly felt honored to win because I knew that everyone who was nominated was just as equally deserving. I was humbled to win, and it made me proud to be a part of the Orientation Team and the Office of Campus and Multicultural Life at Saint Vincent.”

Among her many duties as vice president for student affairs, Mary Collins oversees all aspects of the Office of Campus and Multicultural Life. She was thrilled by Borges’ recent honor and credits the leadership of Wicks for the continued success and well-deserved recognition of the office and its programming.

“Deanna’s focus has always been on helping our students grow, learn and build friendships outside of the classroom. She involves students in all aspects of imagining, planning and presenting events, resulting in fun and engaging activities and opportunities for leadership experience. Deanna inspires this same dedication and enthusiasm in her graduate student employees, including Anna, and in student leaders, and their efforts have been appropriately recognized by national peers as award-winning.”

Borges’ tenure at Saint Vincent College is scheduled to end on June 3, but as she prepares for a career in student affairs and campus life, she will always hold a special place in her heart for her time at SVC.

“The past two years at Saint Vincent have changed my life,” she said. “I have grown so much during my time here and have truly found a home away from home. The Office of Student and Multicultural Life has helped me in my professional journey, as I’ve learned more about working in student activities and how to continue to grow as a supervisor and leader. The students that I have had the pleasure of working with have become a part of my family and have taught me so many things. The students here are unlike any other. They’re kind, caring and passionate about the things they do and always know how to make someone feel welcomed.

“The second I walked onto campus, I felt that, and knew that I would have no trouble finding a place here. I am truly honored to have been able to work at Saint Vincent these past two years!”