LATROBE, PA – Saint Vincent College professor of English Michelle Gil-Montero was named the winner of the 10th annual Projektenmacher Award in recognition of initiatives that, in the spirit of Saint Vincent College founder Archabbot Boniface Wimmer, brought vision to reality through hard work and perseverance.

“Boniface Wimmer, as many know, was a dreamer,” said Father Paul. “He dreamed of bringing education and ministry to the United States, particularly for our country’s many immigrants. However, his dreams were often met with ridicule or brushed aside as fantasy by his fellow monks. Mockingly, he was given the nickname of ‘projektenmacher,’ or, ‘project maker,’ for his dreams and vision which, in the opinion of others, were not realistic.

“We thank God that Wimmer was not deterred by the doubts of others and that he fulfilled his dreams of ministry and education in the United States. Without his dreams, we would not be here today, continuing to move forward, always forward, 175 years later.” 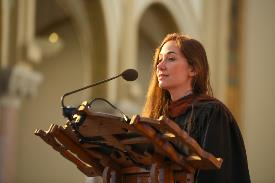 “The admiration for her work was evident in the many nominations we received for her for this year’s award,” said Father Paul. “Today, our students continue to benefit from Michelle’s dreams, passion, guidance and mentorship and continue to achieve success after graduation. Many have earned placement in prestigious MFA writing programs across the country, while many others have been published in journals, anthologies and magazines.”

“I want to thank Father Paul, my students, colleagues and family who rooted for this wild idea in its nascent stages,” said Gil-Montero. “There is a persistent myth in the arts that creativity comes from a place of isolation and dejection, but the truth is, creativities thrives when nurtured by the stability, love and support within a community.”

“When I first mentioned starting a small press poetry publisher at Saint Vincent, unlike the experience of Boniface Wimmer, everyone was enthusiastic and collaborative, even if they didn’t always know what I was talking about.”

Since its establishment in 2018, Eulalia Books has published four original books, including “Prepoems in PostSpanish,” by Jorgenrique Adoum and translated by Katherine Hedeen and Víctor Rodríguez Núnez; “Echo of the Park,” by Romina Freschi and translated by Jeannine Marie Pitas; “Sleepless Nights Under Capitalism: From the Poems of John Wendell,” by Juan Gelman and translated by Erín Moure; and “Katabasis,” by Lucía Estrada and translated by Olivia Lott.

“The best part is that my editorial team are all Saint Vincent students and recent alumni. They are just as head-over-heels in this work as I am.”

Along with recognizing her students, colleagues and family, Gil-Montero was effusive in thanking the late Joe O’Connor, C’65, for his guidance and support during the creation of Eulalia Books. A renowned poet and frequent visitor to his alma mater, O’Connor passed away in April due to complications from COVID-19.

“Joe was my co-Projektenmacher,” she said. “He not only deeply believed in the project, as any of my students will tell you, but he helped to shape it. I miss his input and daily encouragement. We simply could not have started this adventure without him and we are even more committed to continuing it now in his honor.”

Each spring, Eulalia Books accepts submissions of poetry manuscripts from Saint Vincent College graduates and residents of Westmoreland County whose poetry has not appeared in book form for the Joe O’Connor Poetry Series. The books released in this series are all handmade by students in Gil-Montero’s Small Press Publishing course.

Gil-Montero joined the Saint Vincent College faculty in 2007. She holds a bachelor’s degree from Brown University and an MFA from the University of Iowa Writers’ Workshop.

Conducted virtually due to gathering restrictions associated with the COVID-19 pandemic, the 2020 Founders’ Day Honors Convocation can be viewed in its entirety at https://www.youtube.com/watch?v=w2T1CU8g27U&feature=youtu.be.