Robert Gigliotti to Serve as SGA Executive Board President

LATROBE, PA – Robert Gigliotti, a junior biology major from Pittsburgh (15205), has been elected to serve as president of the Saint Vincent College Student Government Association’s (SGA) Executive Board for 2021. 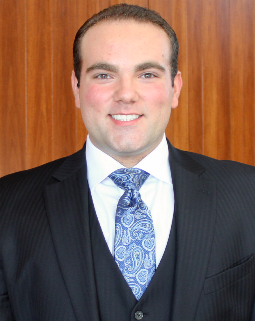 Gigliotti steps into the president position after serving as SGA Executive Board treasurer during 2020. A graduate of Seton-La Salle High School, Gigliotti also serves as president of Saint Vincent College’s American Medical Student Association (AMSA) and is a member of the Spanish Club and Saint Vincent’s chapter of Tri-Beta, the national biological honor society. Additionally, he holds student work-study positions in the Office of Admission and in the Liberatore Human Anatomy Laboratory in the Sis and Herman Dupré Science Pavilion.

Upon his first visit to campus during his college search, Gigliotti felt an immediate connection to Saint Vincent College, so it’s hardly a surprise that he has been so involved in the college community.

“While searching for colleges,” he said, “the community and family-like atmosphere here was unmatched.”

He has been active in SGA for the duration of his tenure at Saint Vincent College, serving as a freshman class senator in 2018-19 before his recent one-year term as Executive Board treasurer, and he remains eager to help serve his fellow students.

“I wanted to pursue the role of SGA president out of a passion for SGA and for Saint Vincent College as a whole,” he stated. “While in office, I plan on pursuing capital projects in both academic and athletic categories.

“Additionally, I, along with the rest of SGA, plan on doing everything we can for student life in the upcoming semester.”

A Dean’s List selection, Gigliotti plans to attend optometry school following his graduation from Saint Vincent College. He is the son of Robert and Linda Gigliotti and a member of Saint Margaret of Scotland parish in Greentree.

Gigliotti and his colleagues on the SGA Executive Board - junior vice president Alaina Dorazio, junior secretary Sarah Centore and sophomore treasurer Andrew Kunz - were sworn into office during the annual gavel ceremony on Saturday, Nov. 14, in the Fred M. Rogers Center.