Since her childhood in Erie, Pennsylvania, Elspeth Mizner has been fascinated with the local news.

Now, instead of watching the headlines, she’ll be the one delivering them to her hometown, as immediately upon her December graduation with a degree in communication, Mizner was hired at WICU-TV, Erie’s NBC affiliate, where she will serve as an on-air reporter and weekend producer while assisting with social media.

“I grew up watching so many of their reporters, some of whom have been there for 30 or 40 years,” Mizner said. “Being able to meet them in person, learn from them and now call them my colleagues and co-workers is a surreal feeling.”

Mizner didn’t have an exact career plan mapped out when she enrolled as a freshman at Saint Vincent in August 2016. While she maintained her fascination with the news media, Mizner decided to major in communication due to its rigorous, broad-based curriculum that exposes students to all aspects of the communication field. She embraced the breadth of the department head on, enrolling in nearly every communication class offered.

“It’s a very broad major,” she said. “Working in the news was always in the back of my mind, but I wanted to keep my options open.”

Dr. Jessica Harvey, chair of the department of communication, said that being able to subject students to so many aspects of the communication field is a point of pride, and credits this broad curriculum in helping Mizner land her first job.

“That is definitely one of the benefits of our program,” Harvey said. “Students are able to carve out a career path that fits with their own interests. For Elspeth, we didn’t have a specific broadcasting track, but she was able to piece things 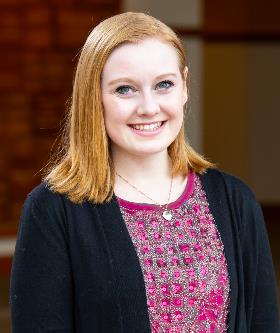 together and create a program for herself that really fit well with her interests, ultimately helping her to land this job.”

Throughout her tenure at Saint Vincent, Mizner thrived in the classroom and as she begins her career in television, she laughed when recalling the course that intimidated her the most early on in her undergraduate career.

“When I took Mr. (David) Safin’s Introduction to Digital Media class, I was so nervous. I had never filmed or edited before. I told myself ‘if I just make it through this semester, I’ll never have to pick up a camera or edit video again.’”

Safin said that such trepidation is natural for many of his students and that despite Mizner’s uneasiness, he wasn’t surprised that she excelled in his class.

“Elspeth approached all learning with an open mind,” said Safin. “Like many, she had no experience with video production before entering my intro class, but that did not deter her from going outside of her comfort zone enroute to becoming such a skilled videographer.

Having successfully navigated her first foray into video editing, Mizner’s interest in working in television continued to grow, and was eventually solidified after taking a course in broadcasting taught by Jennifer Antkowiak, a highly respected television journalist who enjoyed a successful career working in news.

“We really didn’t use a textbook much and didn’t have to take notes for the entire class,” said Mizner, “but it was one of the best classes that I ever took. Professor Antkowiak brought in her own experiences from working in news and told us her own stories to show us what it’s really like. She pulled back the curtain to show that while it may look glamorous working in television, there is a lot of hard work that goes into it. She would often bring in reporters that she worked with, and this was really fascinating to me because by then, I knew this is really what I wanted to go into.”

Now confident in her decision to pursue a career in television, Mizner made her first contact with her future employer in Dec. 2017, when she was afforded the opportunity to shadow a reporter over the duration of winter break and three months later, she received word that she was officially accepted into WICU’s summer internship program. From May through July, Mizner spent 3-4 days a week at the station’s studio shadowing photographers and reporters, filming, editing and practicing on-air reporting. She would again return to the station to shadow over the following winter break.

“It was such a welcoming atmosphere,” she said. “I learned so much from so many people, whether it was a reporter who had been there since the 1970s or one who was right out of college. When I shadowed and interned there, it felt just like a welcoming community, much like it does at Saint Vincent.”

After excelling during her internship experience, Mizner began preparing for her job search during the 2019 spring semester, spending countless hours perfecting her resumé, assembling a video portfolio and readying for interviews, receiving help along the way from the communication faculty.

“Mr. Safin was such an incredible influence,” she said, “and was always great in offering constructive criticism. I know that this will definitely help in the long run. Whether it was my first draft or 10th, I know he was always going out of his way to help and push his students to do the best we could do. Every piece of advice that he gave us is what made me a better editor and videographer.

“Dr. Harvey was always so encouraging and checked in with me every day on my job search. After class, I could go to her office with a question on classwork, and we would end up having a real-life discussion. She truly cared about my personal life, my friends, my family – she’s always been so supportive.”

“Professor Antkowiak,” she continued, “would always review my resumé, helped me put together my reporting reel and offered me advice on how to successfully reach out to television stations for employment. She told me to be persistent, keep following up, send one more email and give them one more phone call.”

“I was asked to interview at WICU on Thanksgiving Day,” she said, “and almost immediately accepted the position. During my interview, I apologized to them for bothering so much, but they assured me that I wasn’t annoying and that I had gone about it the right way. Had I just sent in one application and hoped for the best, I probably would not be in this position today.”

Mizner’s success hardly came as a surprise to the faculty with whom she had worked so closely during her time at Saint Vincent.

“As you’d expect,” Safin said, “it is incredibly gratifying to see someone like Elspeth succeed as she did through college and then immediately find a job that takes advantage of her skillset. She will tackle her career in the same way she tackled her time at Saint Vincent – she’ll have an open mind, she’ll work hard and she will never stop learning. This is only the beginning.”

Added Harvey: “It’s very exciting and it makes me proud. It validates what we do in our department. Elspeth knew what she wanted, she went after it and got it. The fact that she was able to land her dream job like this right away shows how much initiative and passion she has.”

While Mizner is thrilled to begin her television career, she has seen first-hand through her internship experience that for as many people who remain in the industry for three or four decades, there are just as many who choose to leave it much earlier. Knowing that this is a reality of the business, she is confident that the well-rounded education she received at SVC has her well-prepared to take on any challenge.

“Some people go into news and stay for 40 years,” she said, “while others pursue other opportunities after 10 years. Should another door open or another opportunity presents itself down the road, I am confident in the foundation and background that I was able to gain at Saint Vincent.”

Before she gets too caught up in looking at what the future may hold, however, Mizner is ready to jump with both feet into her new career in her old home.

“The fact that Erie is home to me makes this adjustment so much easier,” she said. “I know the area and I know what’s important to the community. I was drawn to the news because every story is important and every story deserves to be told, and I’m really looking forward to telling them to my hometown.”

While honing her resumé, Mizner was also involved in a bevy of activities on campus throughout her tenure at Saint Vincent. She was a member of the award-winning Benedictine Leadership Studies program and served as a residence hall prefect for two years, while she was an active member of MAD COMM (the Saint Vincent communication club) and served as president of the Lambda Pi Eta honor society. Though she’s eager to begin her professional career, she found it difficult to leave Saint Vincent after having immersed herself in so much it had to offer for the past 3.5 years.

“It’s been the best three-and-a-half years of my life,” she said. “I’ve been involved with so much and tried to take every opportunity that’s been presented to me. I made lifelong friends at Saint Vincent and I gained so much from my professors and mentors. I didn’t think it would be this hard to say goodbye to SVC, but it really is.

“It’s a special place, and will always be a second home to me.”