LATROBE, PA – The Saint Vincent College Athletic Department has announced Samantha Firestone as the new head coach of both the men’s and women’s golf programs. Firestone will assume her responsibilities this semester, as she takes over for Dr. Thomas Cline, who has served as the head coach since 2004. Cline will serve in an advisory role this spring before retiring at the end of the season.

“It is a true privilege to be named head coach at my alma mater and an opportunity that is rare,” said Firestone. “I am grateful and excited to start this new journey.” 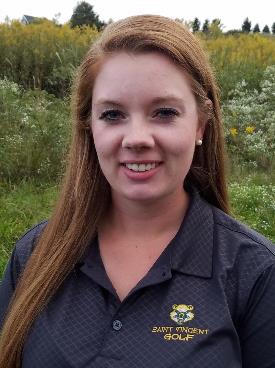 A graduate of Saint Vincent, Firestone competed for four years on the women’s golf team, serving as team captain three times, and was named the college’s Female Presidents’ Athletic Conference (PAC) Scholar-Athlete of the Year in 2016-17. The Pen Argyl, Pennsylvania native was a four-time all-PAC selection, including three first-team nods in 2013-14, 2014-15 and 2016-17. Firestone posted back-to-back top five finishes in the PAC Championships in 2015-16 and 2016-17, and won individual tournaments at the Thiel College Spring Invitational (2015-16), the Saint Vincent Fall Invite, the Penn State Altoona Fall Invite and the Saint Vincent Spring Invite (2016-17).

She finished her athletic career as a captain of the inaugural women’s bowling team in 2017-18, capturing all-tournament honors at the Muskingum University tournament. She earned her bachelor’s degree in marketing in 2017 before completing her master’s degree in instructional design and technology in 2019. Firestone has also spent the past two years at Saint Vincent working as an assistant to the Vice President of Student Affairs and the Dean of Students. She is also the Coordinator for the Center for Catholic Thought and Culture and the Coordinator for Benedictine Leadership Studies and will continue to serve in those roles at Saint Vincent.

In leading the Saint Vincent golf programs, Firestone’s goals are to build upon the foundation of success that has been established under Cline, who led the men’s team to PAC titles in 2013 and 2014 and the women’s team to a PAC title in 2018. Cline was also named PAC Men’s Coach of the Year in 2013 and 2014, and PAC Women’s Coach of the Year in 2018.

“I am looking forward to continuing the tradition of an established golf program at Saint Vincent and mentoring student-athletes,” said Firestone. “Saint Vincent has so much to offer students and my hope is to encourage and guide student-athletes not only in their athletic career, but also in the classroom and as members of the Saint Vincent community.”