Zach Baum wasn’t always the championship-level swimmer he is today. As a freshman at Derry Area High School, Baum decided to try swimming after he stopped wrestling.

He recalls a rough beginning, saying “I wasn’t very good, and my coach was putting me in events like the 200 [Freestyle] and I was getting lapped!”

Not to be discouraged, Baum began to catch on, improving in each of his events and eventually qualifying for the PIAA Class 2A State Championships in the 200 Freestyle Relay.

Though he didn’t do as well as he wanted to, Baum’s passion for the sport was invigorated.

“The experience was so great, and I knew that I had the potential to make it, I just needed to keep working at it.” 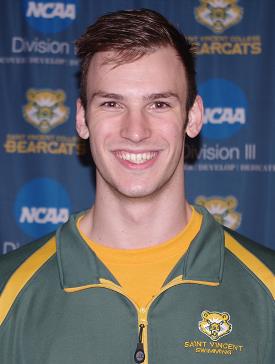 And work he did. Baum spent the remainder of his high school career breaking every single boy’s swimming record at Derry Area, surpassing times he previously considered “ridiculous.” WPIAL qualifying times were achieved with ease, and he would return to the state championships in relays and individually for the next three years; most notably, he would place second overall in 100 Butterfly as both a junior and senior.

He views his accomplishments for the Trojans with a sense of altruism, saying, “It sets a standard for the next group to come in.” His goal wasn’t always just to win or improve, it was also to succeed for his teammates and coaches, for his friends.

After his high school graduation, Baum registered to be a Bearcat, attracted by the “unbeatable” financial aid package and the “insane” employment for SVC graduates. He also immediately connected with the swim team, as well as the blossoming program. Now a junior communication major with a minor in mathematics, Baum continues to work hard and succeed for his fellow teammates.

In his three years at SVC, Baum has won several events at the Presidents’ Athletic Conference Championship meet each season, breaking seven Bearcat records and attaining five NCAA B cuts in the process. This past season, he not only would break his own record in the 100 Butterfly with a time of 48.92, but this B cut gave him the chance to swim at the NCAA Division III National Championships in Greensboro, North Carolina. Unfortunately, he was deprived of this opportunity after the NCAA canceled the event in light of the ongoing COVID-19 pandemic.

Despite the unfortunate circumstances, Baum remembers his junior season fondly. He stresses the importance of a strong mental game, and with his own improved after a chaotic sophomore season, he was able to devote more attention to “the small things that make a huge difference” with few external distractions. He also had high praise for his teammates, saying “The team dynamic this year was better than any other year so far. Everyone seems to be getting along, and everybody is working hard and pushing each other.”

Within that dynamic, Baum seeks to set a good example for his teammates, seeing it as “the number one thing in a team sport based on individual performance.” He enjoys talking to his peers about their times, and he is quick to offer a technical tip that might benefit them in a future race. His magnanimous spirit resurfaces as he says, “being able to make the long-term change is awesome.”

Outside the pool, Baum finds immense joy in the diversity of the Communication Department. His favorite course so far has been Interpersonal Communications with Dr. Jessica Harvey, crediting it for getting him to think in new and deeper ways. Baum also appreciates how the concepts he has learned under Dr. Harvey can be taken and applied in other disciplines, like his philosophy courses. On future career plans, Baum says, “I’d just like to see where road takes me,” though he mentions a desire to be an assistant coach for a college team one day.

With his senior season looming, Baum emphasizes the importance of recruiting in the upcoming months to help the program even after he swims his final race. Furthermore, he remarks “I just want to have another great year. If everyone improves, then I think the season is successful.” He jokes that even if everything doesn’t go as he expects, he’s confident that he can be relied on in the toughest of situations.

Smiling, he says, “I don’t want to let anyone down.”