SVC Players to Present 'Into the Woods'

LATROBE, PA – The Saint Vincent College Players will present four performances of the musical fantasy “Into the Woods” at 7:30 p.m. Thursday, Friday and Saturday, Feb. 20-22, and 2 p.m. on Sunday, Feb. 23. The performances will take place in the Performing Arts Center of the Robert S. Carey Student Center on the Saint Vincent campus. 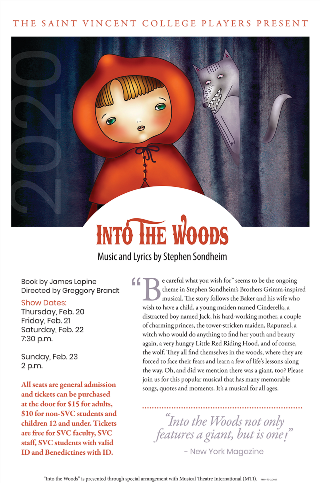 Written by Stephen Sondheim and James Lapine, “Into the Woods” intertwines the plots of several Brothers Grimm and Charles Perrault fairy tales, with main characters taken from “Little Red Riding Hood,” “Jack and the Beanstalk,” “Cinderella” and “Rapunzel,” among others. The musical originally debuted on Broadway in 1987 and won multiple Tony Awards, including Best Score.

The SVC Players’ cast for “Into the Woods”