LATROBE, PA – Helen Kish, a homeschooled student from Pittsburgh (15237), has been awarded a four-year, full-tuition scholarship to Saint Vincent College as a winner of the 39th annual Wimmer Scholarship Competition.

Kish was awarded the scholarship, valued at more than $145,000, after placing in the top five in the Scholarship Competition, which drew 155 entrants. She was presented with the award on a visit to Saint Vincent College by president Father Paul R. Taylor, O.S.B., and Melissa Sobek, associate director of admission.

The daughter of Robert and Maria Kish, she was named a Commended Scholar in 2018 for her performance on the PSATs, while she has been enrolled in classes at the Community College of Allegheny County, twice being named to the Dean’s List and earning selection into Phi Theta Kappa, the international honor society for students at two-year colleges.

Kish is involved in a number of extracurricular and volunteer activities. As a member of the FINS Robotics team, she worked with team members to build a functioning robot from a box of parts, writing programming that enabled the robot to complete tasks. She is also president of the local chapter of the Toastmasters Gavel Club and a volunteer for Maranatha Youth Camp, while she took part in the Leap at CMU summer enrichment program at Carnegie Mellon University. She is also heavily involved in activities at her parish, Most Precious Blood of Jesus in Pittsburgh.

The Wimmer Scholarship program is named after Archabbot Boniface Wimmer, who founded Saint Vincent College in 1846 as the first Benedictine college in the U.S. The program recognizes high school students with outstanding academic ability and encourages them to pursue a quality undergraduate education at Saint Vincent College.

The scholarship winners are based on their performance of a written examination administered in November. The 155 students who participated in this year’s exam were college-bound and met the academic qualifications of a minimum 3.25 grade point average and 1170 SAT/24 ACT. This is the 39th year of the Wimmer Scholarship Competition. 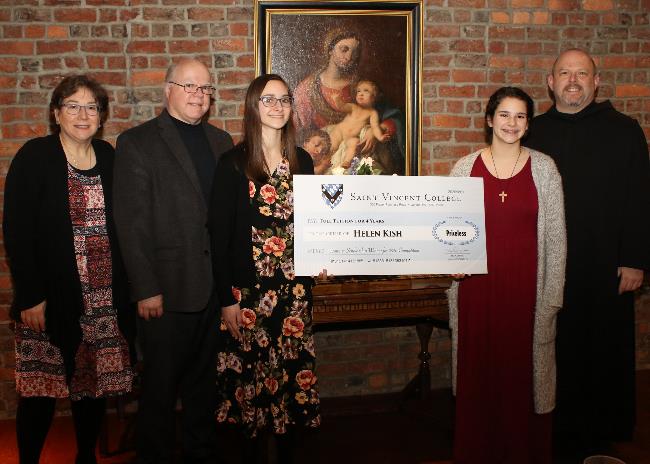