LATROBE, PA –  Readers of The Tribune-Democrat saw a familiar name in the byline of the most recent chapter of “Your Story,” an ongoing serial penned by readers of the Johnstown, Pennsylvania, daily newspaper. 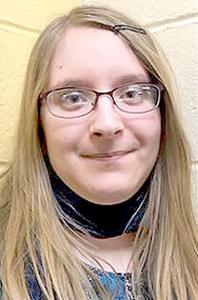 For the fifth time in as many years, the newspaper’s editors selected a submission by Saint Vincent College senior Nicole Fratrich, an English major and native of Seward. Her most recent contribution was published on Sept. 11 and was the fifth and final chapter of the latest installment of “Your Story,” a mystery centered around some curious discoveries made by a mother and her young children upon moving into a new home.

“’Your Story’ typically runs from October through December,” Fratrich explained. “The goal is a 5-chapter, holiday-themed story that ends on Christmas Day. This summer, however, they initiated a new installment of it and made the 5-chapter story a mystery. Every 5-chapter story has a new plot with new characters, so my final chapter concluded this story.”

Fratrich first was published in “Your Story” in 2016, when she had two chapters selected for inclusion. She subsequently penned chapters that were included in the 2017 and 2019 editions of the serial.

“When I wrote and won my first submission,” she said, “I was a senior in high school. I knew I was coming to Saint Vincent, but that’s all I really knew about my future as a writer. It was also a time when my dad was very sick and I think “Your Story” was another distraction that brought me back to some sense of normalcy, whether I realized it at the time or not.”

Since her first submissions four years ago, Fratrich has continued to blossom as a writer and has earned a number of laurels, seeing several short stories published in magazines, winning various writing competitions on the local and state levels and placing in SVC’s 2020 Martin Luther King Jr. Day Poetry Competition.

“Back in 2016,” she said, “my writing was good, but I didn’t feel as confident in it as I do now. That’s not to say, of course, that I still don’t doubt my writing – I do all the time! – but I feel more confident in my writing style and in my process. Looking back, I can track where I was in my writing career just by looking at ‘Your Story.’ I even shake my head when I read my interviews with The Tribune-Democrat in 2016 – my, how I’ve grown!”

Fratrich feels that authoring submissions for “Your Story” has improved many facets of her writing, while she views the education and experience that she has received at Saint Vincent College as invaluable.

“’Your Story’ has helped me practice connecting plot points and avoiding plot holes,” she said. “As I wrote submissions for this year’s ‘Your Story,’ I was surprised at how smoothly the scenes came to me. I was just writing away and I felt pretty good about what I had on the page. I think four years of reading and writing at the collegiate level has strengthened what I write, how I write and how I think about my writing. I still have a lot of room to grow as a writer and an analyst of my own writing, but four years ago, I never imagined I’d be where I am now in terms of my writing progress.”

Fratrich is currently engrossed in a pair of major writing projects. First, she is in the midst of putting the finishing touches on her senior capstone project, a memoir on the past four years of her life.

“I have a novel manuscript!” she exclaimed. “My novel is classified as a new genre of literature called New Adult. It comes after Young Adult, as the characters are usually college-aged, between 18 and 30. The subject matter is more about life after the coming-of-age period. Think college life, starting and building careers, marriage, etc. My book is set in the 1980’s and follows a new and upcoming band which has to compete with the band they’ve always looked up to.”

Fratrich has been working on her book throughout her college career and feels that it is almost ready for publishing.

“Back in 2016,” she said, “I had no idea where this manuscript was going. I wanted to publish, but I was so lost. Over the past four years, I’ve gotten feedback from professors and friends and I’m finally at the stage now where I can query literary agents.”

While Fratrich’s main priorities remain her capstone project and novel, she plans to continue to submit chapters to future editions of “Your Story.”

“’Your Story’ has been an exercise that has helped me get to where I am today. Even more, it’s a great way to get involved with the community. My family and friends always tell me that they’re on the lookout for my chapters.

Read the most recent edition of “Your Story,” including Fratrich’s concluding chapter, at https://bit.ly/2ZZKCJY.