LATROBE, PA – Dr. Michael Krom, professor of philosophy and director of the Benedictine Leadership Studies program at Saint Vincent College, has released the book “Justice and Charity,” an examination of the renowned theologian Saint Thomas Aquinas. 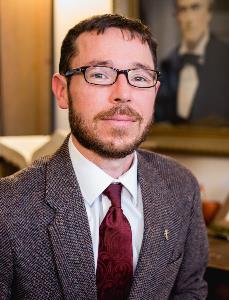 Published by Baker Academic and released July 22, “Justice and Charity” explores Aquinas’s moral, economic and political theory and illustrates how his system of thought remains relevant in addressing contemporary societal and political issues more than 700 years after his death.

“This book is the fruit of 10 years of teaching college students, seminarians and monks at Saint Vincent,” said Krom. “Whether I was teaching Ethics, Political Philosophy or Faith and Reason, I found the ideas that crystallized in this book to be those that most helped my students’ development. I dedicated it to my students and it was written to anyone who wants to sit with me at the foot of one of history’s greatest thinkers and saints.”

Krom argues that in order to understand the Church’s teaching on moral, economic and political issues, one needs a strong foundation in Aquinas’s thinking. 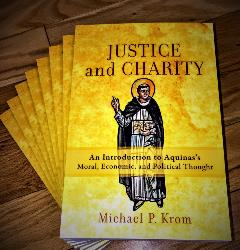 “As Saint John Paul II said,” Krom stated, “the Church sees Aquinas as ‘a master of thought and a model of the right way to do theology.’ Whether one is a Catholic trying to think with the mind of the Church or a non-Catholic who wants to understand Catholic Social Thought, Aquinas provides the basic vocabulary and insights that have allowed the church to so effectively speak to contemporary life.

“While some wrongly think that Pope Francis marks a departure from this approach,” continued Krom, “the Holy Father himself insisted that those who want to interpret his writings correctly must have a solid formation in Aquinas’s thought. With these things in mind, I wrote this book as a faithful Catholic who wants to help others grow in their appreciation for the depths of the Catholic Intellectual Tradition.”

Krom plans to incorporate this book into his coursework for the upcoming academic year.

“I will use the book in both Thomistic Philosophy and the ethics course I teach for the Benedictine Leadership Studies students,” he stated. “This book is intended for undergraduates, seminarians and anyone who wants to understand Catholic Social Teaching more fully.”

“Justice and Charity” is available in both paperback and hardcover and can be purchased through Baker Academic, Amazon, Barnes and Noble and other major booksellers nationwide.

PHOTO 2: The cover of “Justice and Charity”