Queenan has held leadership positions in the private, public, nonprofit and faith sectors, tackling society’s most pressing problems. At Bridgespan, which collaborates with mission-driven leaders, organizations and philanthropists to break cycles of poverty and injustice, Queenan leads a number of large, complex initiatives. 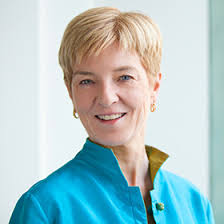 She launched and led Bridgespan’s global practice for its first decade, traveling to 50 countries on six continents, laying the groundwork for Bridgespan to become the global organization it is today. She spearheaded Bridgespan’s multi-year initiative to end “the nonprofit starvation cycle,” culminating in a 2019 announcement of bold policy change by five foundation presidents. Her clients include the precedent-setting Goldman Sachs’ 10,000 Women, an initiative that has achieved strong results by empowering underserved women entrepreneurs; the Ford Foundation’s BUILD program, a $1 billion investment in the long-term capacity of social justice organizations around the world; and MacArthur Foundation’s Lever of Change, which unlocks philanthropic capital for social good. She led similar high-impact engagements with the Bill & Melinda Gates Foundation, CIFF, UN Foundation, Salvation Army, Camfed, Global Teen Challenge and Catholic Charities D.C.

Queenan has published numerous articles on nonprofit strategy and scale, board governance, building strong organizations, women’s entrepreneurship and performance measurement in the Stanford Social Innovation Review, Chronicle of Philanthropy and other journals. She has been an invited speaker at the InterAction Forum, Global Philanthropy Forum, Vatican Impact Investing Conference, MacDonald Conference for Leaders of Character at West Point and other venues.

Prior to Bridgespan Queenan served as a senior official in the Executive Branch of government, first as White House Fellow and then Associate Deputy Secretary of Labor, overseeing line agencies with a combined annual budget of $28 billion and leading Cabinet-level working groups on pension reform, steel industry restructuring and child care policy. Later she served as chair and CEO of the White House Fellows Foundation in Washington, D.C., leading a successful fundraising campaign that put the program on solid footing. She was a member of the President’s Commission on White House Fellowships for five years.

Queenan is deeply involved in revitalization of the Catholic Church, the largest provider of social services in the world with 1.2 billion members. She serves on the board of Leadership Roundtable, a network of leaders committed to excellence in Catholic Church leadership and management. From 2014-2020, she served on the board of Catholic Relief Services, the $1 billion humanitarian and relief arm of the Catholic Church. She chaired the board’s response to the recent Church crises and scandal and served on the Audit, Finance, Governance, CEO Search, CEO Evaluation and Strategic Planning Committees. She spoke at the Vatican Impact Investing Conferences in 2014, 2016 and 2018 and attended the Summer Theological Institute at Boston College in 2012 and 2014. Jeri has been a lector for 30 years, an RCIA sponsor and catechist.

She is past director of other nonprofit organizations and corporations including National Organization on Disabilities, MicroEnsure, The BOMA Project, The Langley School and Reliance Insurance.

She and her husband, Charlie Queenan, have been married for 37 years and are the proud parents of four adult children – Mike, Max, C.J. and Jenna.

Saint Vincent College will award 118 bachelor’s or master’s degrees, while individually recognizing each of its May 2020 graduates, during the virtual commencement event. Recorded in the historic Saint Vincent Archabbey Basilica, it will be available for viewing on the Saint Vincent College website (www.stvincent.edu) and YouTube channel (www.youtube.com/SaintVincentCollege).