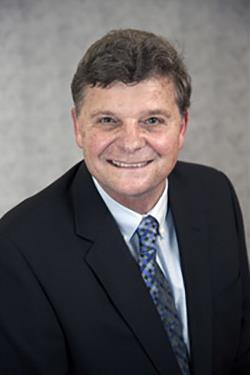 Named in honor of the founder of Saint Vincent College and Archabbey and pioneer of Benedictine monasticism in the U.S., the Wimmer Faculty Award recognizes a senior faculty member who has demonstrated sustained excellence.

Prior to arriving at SVC, he was an internationally renowned expert in materials science and engineering, holding the position of division head at the U.S. Department of Energy’s Los Alamos National Laboratory.

“It was a significant honor to join the Saint Vincent community in 2008,” said Follansbee. “Though I was without a background in academia, I was warmly welcomed onto this campus by staff, faculty and students alike. I am humbled by the award bestowed upon me in the name of Boniface Wimmer for our efforts to build the engineering community. I joined Saint Vincent as the James Will professor of engineering science, and it quickly became my mission and passion to build the engineering community here.”

During his tenure at Saint Vincent College, Follansbee has been instrumental in the continued growth of the Engineering Department, including the development of several new courses, the strengthening of the College’s 3/2 engineering program and the formation of its four-year engineering bachelor’s degree program. Under his guidance, the department has grown to include more than 70 students and is now housed in one of the crown jewels of the Saint Vincent College campus.

“Dr. Follansbee has developed new courses, including Introduction to Engineering, and has supervised independent studies to enhance the experience of engineers at Saint Vincent,” said Dr. John Smetanka, vice president for academic affairs and academic dean. “His leadership led to the formation of the College’s four-year bachelor’s degree program in engineering and his guidance was central to the design of the James F. Will Hall, the latest addition to the Sis and Herman Dupré Science Pavilion, with laboratories, a classroom, offices and conference room.”

Follansbee’s students have continued to excel after graduating from Saint Vincent College, both professionally and academically. Recent graduates of the engineering program have gone on to professional careers with such corporations as Lockheed Martin, Kennametal, Westinghouse and Philips Respironics, while others have continued their studies by pursuing Ph.D.’s or master’s degrees at institutions including Penn State University, Carnegie Mellon University, Massachusetts Institute of Technology and the University of Pittsburgh.

“I’ve had a rich and rewarding career as an engineer,” Follansbee said, “and I am gratified that so many Saint Vincent graduates are embarking upon careers with these same opportunities. I hope they, in turn, recognize the role that Saint Vincent has had in shaping their futures.”

In addition to his academic work at Saint Vincent College, Follansbee is the author of the acclaimed book Fundamentals of Strength (Wiley-TMS 2014), which explores the underlying theory, mechanistic basis and implementation of the mechanical threshold stress (MTS) model.

Follansbee holds a bachelor’s degree in mechanical engineering from Duke University, where he was a member of the freshman basketball team. He then went on to earn a master's degree from Rensselaer Institute of Technology and his Ph.D. from Carnegie Mellon University. He and his wife, Carolyn, reside in Greensburg. They are the proud parents of three children – David, John and Nicole – and the proud grandparents of 13 grandchildren.

Follansbee's award was announced on a special Honors Convocation video produced by the College in lieu of the traditional annual ceremony, which was canceled due to the COVID-19 pandemic.