Sarah Wozniak’s four years as a student-athlete at Saint Vincent College may be winding down, but her future is shining as bright as any star.

Last summer, Wozniak,a senior physics major from Hopwood, applied her experience as a captain and middle hitter of the women’s volleyball team in conjunction with the knowledge she continues to develop as a physics major to a field she is quite fond of, astrophysics.

Wozniak honed her academic skills and applied her competitive edge in the 10-week Research Experience for Undergraduates Program (REU), conducted by the National Science Foundation and hosted by the University of Oklahoma.

She was encouraged to apply for this internship as a junior by a senior physics major who himself had participated in the program in the summer of 2018. Amidst the intense application process for several other REUs, the University of Oklahoma’s was the only that accepted her.

After her acceptance, Wozniak traveled from her native Hopwood to Norman, Oklahoma, where she was assigned a mentor, housing and a stipend while she conducted her research. 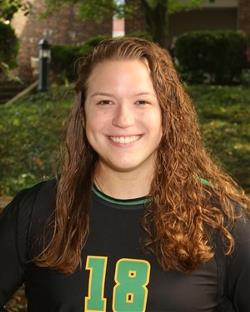 Elaborating on the research itself, Wozniak said, “My mentor does simulations on early evolutions of the solar system. He coded for giant planets, planetesimals and asteroids, as well as gravity, and from an initial position, he would let the simulation run.” Once the variables concluded interacting among themselves, she worked with the data, looking for what planets remained, how many planetesimals were left, and everything’s new location.

“I went through more than 100 simulations, and out of those, I ended up with 17 that resembled our solar system at the end.”

Wozniak shared her progress in weekly meetings with her adviser and a group of graduate students he was also assisting. Undaunted, she said of these meetings, “Being on a team really helps you. You’re not as shy about talking about your stuff and talking to other people. I wasn’t afraid to ask questions.”

She further spoke of the advantage of athletics in other fields, “Athletics just gives a different mindset. You’re more open to people and you have this whole other dimension to your personality. Not a lot of [the other interns] were like that.”

While conducting research, every Tuesday and Thursday, Wozniak and the other undergraduates attended lectures by other physics professors who discussed their own research as well as graduate school opportunities. She said, “I’m still back-and-forth about [graduate school] to be honest with you. Research is really cool, but you need to teach somewhere to do your own research, and I don’t see myself as a teacher.”

Nonetheless, the immense amount of coding experience she gained from the internship has led her to consider other hands-on, coding-based jobs in fields like robotics and artificial intelligence.

The significance of Wozniak’s position as a woman in a STEM program was also not lost on her. A passionate advocate for the growth of women in STEM programs, Wozniak is a recipient of the Clare Boothe Luce Scholarship, where she mentors young women who want to go into the sciences.

Wozniak further expressed how being an athlete helped her hone her role as an academic mentor, noting that over the course of her volleyball career she has been able to interact with and empower women of all ages.

She mentioned a recurring exchange in these interactions, saying “[Female volleyball players] will ask me what my major is, and I’ll say physics, and they’ll say ‘Oh, I didn’t know girls could do that!’ and I’ll say, ‘Heck yeah they can!’ It all meshed together.”

Wozniak helped lead the Saint Vincent women’s volleyball team to a 16-18 overall record and 10-6 in the Presidents’ Athletic Conference in 2019. The Bearcats made it to the semifinals of the PAC Championship Tournament.

Wozniak was also member of the PAC Fall Academic Honor Roll and was named PAC Student-Athlete Advisory Committee (SAAC) Scholar-Athlete of the Month for October. Later in the month, she received the honor of being named an Academic All-District selection by the College Sports Information Directors of America (CoSIDA).