With generous support from Fred and Dinah Gretsch and their family, the Gretsch Fellowship in Children’s Media was created to conduct research and develop best practices in music experiences for children within the ethos and vision of the Fred Rogers Center and its mission “to help children grow as confident, competent and caring human beings.”

“Dinah and I would like to thank the dedicated team at Saint Vincent College for finding these fellows,” said Fred Gretsch, CEO of Fred Gretsch Enterprises. “They both bring a wealth of knowledge, unique experiences and shared passion for music and children. We now challenge Ms. Palmer and Mr. Hills to seize this opportunity to the fullest. Join us in continuing the legacy of Fred Rogers by enriching the lives of children through music.”

“The Fred Rogers Center is grateful to the Gretsch Family Foundation for support in sponsoring the two Gretsch Music Fellows who will join the Fred Rogers Center,” said Schomburg. “The Fellows were selected from a poll of more than 40 applications from all over the country. The Gretsch Music Fellows will carry forward the legacy of Fred Rogers through their keystone projects that engage children, their families, their teachers and their communities in celebrating the role of musical expression in bringing about joy, happiness and learning in the lives of children.”

KATHERINE PALMER
Palmer, who will begin her one-year fellowship in January, holds a bachelor’s degree in music (clarinet) from the University of Miami, as well as a master of music (clarinet), master of arts (ethnomusicology) and doctorate of musical arts from Arizona State University. She is currently the curator of education at the Musical Instrument Museum (MIM) in Phoenix, Arizona, where she is in charge of developing and teaching interdisciplinary, ethnomusicological content. 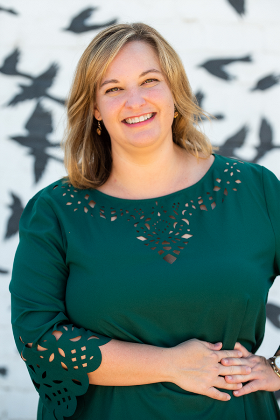 “I was beyond thrilled to learn that I had been selected for the fellowship,” said Palmer, an avid admirer of Fred Rogers. “Fred Rogers’ work has deeply impacted my own teaching and development. To be associated with the Fred Rogers Center is a sincere honor.”

She has been instrumental in molding MIM’s educational approach and overseeing content related to MIMkids classes, field trips, professional development, volunteer docent training and creative aging sessions. She also serves as a faculty associate in the Herbert Institute of Design and the Arts at Arizona State University and adjunct instructor at Paradise Valley Community College.

She is also the executive director of Daraja Music Initiative (DMI), a non-profit organization that provides music and environmental conservation education in the Kilimanjaro Region of Tanzania to secondary students. Aiming to bridge the arts and sciences, DMI promotes sustainability of African Blackwood trees from which clarinets, among other instruments, are constructed.

Palmer performs with the Mill Ave Chamber Players, a Phoenix-based woodwind quintet, and has appeared with a variety of musical groups throughout Arizona including the Arizona Musicfest, the Phoenix Symphony and the Phoenix Theatre Company. In addition to frequent national and regional appearances, Palmer has presented papers, workshops and performances at international conferences for the College Music Society, the Society for Ethnomusicology, the International Clarinet Association’s ClarinetFest and the International Society for Music Education.

Palmer plans to pursue the concept of ‘expanding the neighborhood’ by closely examining the Fred Rogers Center’s vast archives to learn about Rogers’s use of music in his neighborhood, researching intersections between best practices in various streams of multicultural education and developing a model that incorporates music listening and music making as a practical guide for building cultural open-mindedness for families and young children.

“Children live inherently musical lives,” said Palmer, “and as a musician, music educator and ethnomusicologist, I have spent the last decade of my career immersed in the musical worlds and culture of young children. I have continued to pursue and engage in this work because I believe that providing authentic musical experiences to children, much like Fred Rogers did, aids in their cognitive and physical development.

“Furthermore, I believe that providing diverse and authentic world music experiences aids in building cultural awareness, competency and compassion. In an everchanging global environment, acceptance of diversity and understanding of difference empowers young children to construct a world that aligns with the Fred Rogers Center’s mission of growing ‘confident, competent and caring human beings.”

Palmer is eager to begin her appointment and says her first order of business is to explore the vast Fred Rogers archive in the Rogers Center to study his compositional practices and learn how he used music to promote empathy.

“From these findings,” said Palmer, “I hope to create a model for music listening and music making that families, caregivers and educators can use with young children.”

CORY HILLS
Grammy award-winner Hills will begin his one-year appointment in September 2021. An active performer, composer and recording artist in Los Angeles, as well as a member of the Los Angeles Percussion Quartet, he holds a bachelor’s degree in music from Northwestern University, a master of music performance from Queensland Conservatorium, a master of music theory from the University of Kansas and a doctorate of musical arts from the University of Kansas. He has individually commissioned and premiered more than 150 original works for percussion and has given solo and chamber recitals across the U.S., Australia, Europe, New Zealand, China and Mexico. 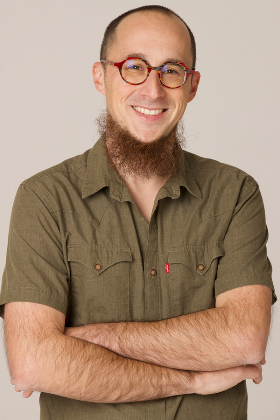 A passionate advocate for children’s music education, Hills is honored to be selected as a Gretsch Fellow and speaks glowingly of the lasting impact that Rogers has had on him since childhood.

“As a child of the 80s,” said Hills, “I was greatly influenced by Mr. Rogers, as I imagine millions of children around the world were. In particular, I was always impressed with how he never spoke down to a child – rather, he treated them as intellectual peers, capable of understanding complex issues. When I saw the connection between music, early childhood education and Mr. Rogers, I realized that this was a dream opportunity. To top it off, the Gretsch family is sponsoring this fellowship and Gretsch is known in the percussion world for making some of the highest quality drums for more than a hundred years.

“I am extremely honored to receive this Fellowship and, more importantly, cannot wait to get to work. The best part is that I will be able to reach a more diverse children’s audience throughout the country and abroad.”

In 2009, while a fellow at Institute Fabrica in Italy, Hills launched the program Progressive Storytelling, which brings classical music and storytelling to children in underserved communities. Over that span, he has given more than 600 performances to more than 170,000 children in 10 countries, while also releasing two award-winning children’s albums (“The Lost Bicycle” and “Drum Factory”) and three children’s books (“The Lost Bicycle,” “Beatrice and the POGs” and “Beatrice and the Search for the Orb”).

“Simply put,” he said, “I am absolutely passionate about all things related to elementary arts education.”

During his fellowship at the Rogers Center, Hills will channel this passion to create a 50-minute music performance/assembly program for elementary schools, using research from the Fred Rogers Archive to explore different ways in which Rogers tackled difficult social concepts and topics with children.

“This will be an anti-bullying program,” he said, “that centers on issues related to social media and the importance of self-confidence and self-esteem. There are plenty of resources available for middle and high school students, but these topics have often been deemed too complex or too mature for young children.

“The Archive is a treasure trove of information centered on sound educational philosophy and research and I look forward to applying this research to the 21st-century child.”

About the Fred Rogers Center for Early Learning and Children’s Media at Saint Vincent College
Planned under Fred’s guidance and established in 2003 at Saint Vincent College in his hometown of Latrobe, Pennsylvania, the Fred Rogers Center supports and enriches the important work of those who help children learn and grow across multiple disciplines, including early learning, education, communication, health, media and more. By focusing our work on strengthening human relationships and promoting meaningful uses of technology and media, we support the current practice and ongoing development of child-serving professionals; expand educational opportunities for all students (including the Fred Rogers Scholars); and collaborate in public service and applied research with educational and research institutions and community organizations. Our work is rooted in the southwestern Pennsylvania region and continues to grow across the United States and around the world.

About Gretsch
With its emphasis on hand-craftmanship and commitment to quality over a storied 135 years and counting, Gretsch is globally recognized as a manufacturer of the world’s finest guitars and drums. Over the years, “That Great Gretsch Sound” has earned endorsements for some of the music industry’s most respected artists from Chet Atkins and George Harrison to Bono and Brian Setzer. Led by fourth generation CEO Fred Gretsch and CFO Dinah Gretsch, the family supports educational and philanthropic initiatives that champion enriching lives through participation in music.